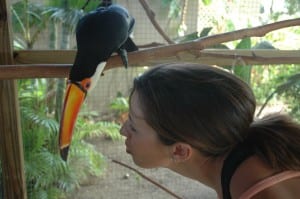 About a month ago, I made a big mistake when working with Paco and have been paying the price ever since. It is a perfect example of how often times, it’s not one big thing we do to hurt our relationship with our birds, but rather the little things that are born of pure complacency. Here’s the story…

David had the day off of work and we decided to spend the afternoon indoors reading, relaxing, etc. While I mostly felt like just chilling out, I decided to bring Paco inside to play anyway because he seemed particularly hungry for extra attention that day. We didn’t have any plans to go anywhere and my laziness was not a good enough excuse to deprive him of some added fly time. So, in he came after lunch. 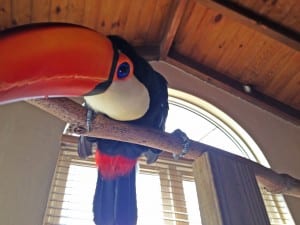 * Side note *: I generally bring Paco in the house about three times per week. On these days, not only does he get all of his normal enrichment activities outside in his aviary as per our typical schedule, but he also gets at least three additional hours inside with me. I would love to be able to bring him inside more often, but having Paco in the house is similar to what I imagine having a flying monkey inside the house would be like – one that you love dearly and wish to protect from harm. He can never be out of my sight as he can get himself into trouble quickly (even in my “toucan-proofed” house) and he requires a ton of direct interaction time. Paco loves to be by my side, involving himself in everything I’ve got going on. This means that when he’s inside, I’m constantly training him (flight recall as well as reinforcing other behaviors) and no matter what else I am doing, am always within eyesight of his activities. 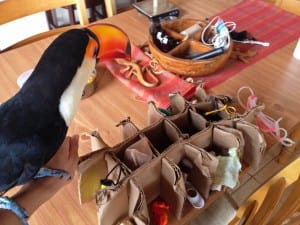 That particular day, everything was pretty much business as usual. We played with his toys, had some great recalls, wrestled with the pillows, and laughed a lot – our typical M.O. of Toucan-in-the-House Day. My big mistake came towards the end of our time together. That month, I was bringing Paco back outside to his aviary around 5:30 pm on the days he would come in the house. This allowed me enough time to play with Paz and Pepe and allowed Paco time to settle back in to his aviary before bedtime. I still did not have Paco consistently trained to go into his backpack when asked. He would usually go in it though to eat frequently throughout his time in the house or would chase after toys in there. So usually, when it started getting close to 5:30 pm, I would just zip him into the backpack whenever he got inside and reinforce him then. Here’s where my lack of full engagement was my downfall. 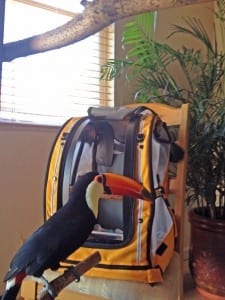 At about 4:45 pm, Paco hopped into his backpack and started eating. I groaned, as I was not yet ready to take him back out. I still hadn’t prepped the enrichment game for Paz and Pepe and I was trying to finish up a project of my own in the time I had left. I figured I still had 45 minutes and even though he was gobbling down his food, I assumed that I could still get him in the pack later with a game of fetch, even if he wasn’t hungry. Turns out this was the wrong assumption to make. Come 5:20 pm, I was starting to work towards getting Paco ready to go back outside. But he showed little motivation to get anywhere near the backpack and instead, snuggled into the sunset on his favorite windowsill up high. By 5:30 pm, he still wasn’t showing any inkling of making plans to respond to my requests, so David went out to cover for me with Paz and Pepe’s playtime as I continued to try and coax Paco into the pack. 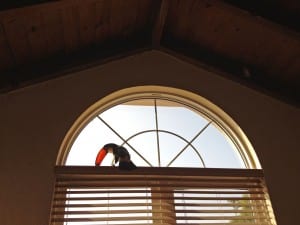 In what felt like fast forward, the sun rapidly progressed in its descent into the horizon and Paco remained adamant in his refusal of the backpack, despite my shameless pleas and bribery. I felt desperate to get him outside for bedtime – he had never spent the night in the house before and I was worried that he was going to freak out once it was dark and he was not in his own “bed”. As a last resort, David took one for the team and ended up catching Paco in his hands and carrying him back out to his aviary just before dark. While it was not the most dramatic of conclusions (we didn’t have to chase him, towel him, or anything that antagonistic), I felt beyond guilty that David had to further strain his already tenuous relationship with Paco.

As it turned out, Paco holding a grudge against David was a non-issue. Even though David was the one who actually manhandled him, his relationship with him, thankfully, remained unchanged. Instead, Paco decided that the backpack was to blame. Initially, I was puzzled by this reaction as nothing bad happened directly with the backpack – he was never forced into it and didn’t even ride in it on his way back outside. The only conclusion that I could draw was that at the time of “the incident” (as I’m calling it these days), he knew I wanted him to go in the backpack; he felt my increasingly stress-charged energy; and he made the decision not to go into it even though he knew I was asking him to. Don’t ever underestimate the intelligence of birds – Paco inherently knew that our little dispute had the backpack at the heart of it and so he dished out his revenge accordingly. 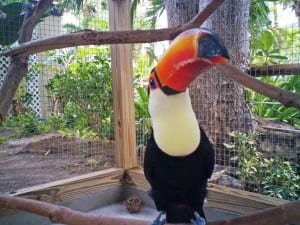 This turn of events was particularly depressing for me. I had worked so hard to get him trained into his backpack in the first place and now, every time he flat out refused to get near it, it really broke my heart because I knew it was all my fault. I had personally sabotaged my own hard-won efforts. Re-training him into the backpack has been worse than starting from scratch – I have had to go back to the beginning but this time, he had a predisposition of mistrust towards the pack. It has been slow-going and tedious. After a month of dedication to re-associating the backpack as a positive in his mind, I am happy to report that he is going in and out consistently and most of his apprehension has dissipated. I have been taught a valuable lesson the hard way and paid for my mistake with my time and patience. 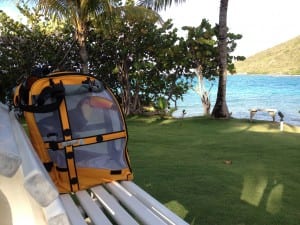 We live on the ocean and travel in boats more than we do cars. David always says that bad things happen when people lose respect for the sea. Especially here in the Caribbean, where the waters are typically mild and predictable, it’s easy to think it will always be that way – that you can let your guard down and that you don’t have to take the normal safety precautions that people do elsewhere. The same is true for what happened with Paco. I lost respect for the attention that is required when working with a toucan. I got overly comfortable with my relationship with him and overestimated his level of training. 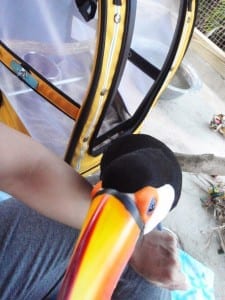 From this experience, I have several takeaways:

– When I have Paco inside the house (or anywhere for that matter), I need to be fully committed to his personal timing and needs. Until he is consistently trained where he can be cued into the backpack, I need to compensate by being more flexible with my own timing and seizing opportunities when they arise.

– It is also important that when working with the Three-Cans, I always stay in-tune and listen to my intuition. That day, something was telling me I needed to get up when he was munching away in his backpack and zip him in. I somehow knew that in ignoring that feeling, I was setting myself up for potential difficulty later. And boy, was I right. Listening to my intuition will not only help maintain and protect my relationship with the Three-Cans, but it will also keep them safe.

– No matter how well-trained Paco becomes, no matter how strong our bond, I always need to remember that he is a wild animal. He will do things that I don’t understand and he will have trouble interpreting my actions at times. He will always have his own agenda and he will NEVER be 100% consistent. I should never expect him to be, as that will be when I fail. 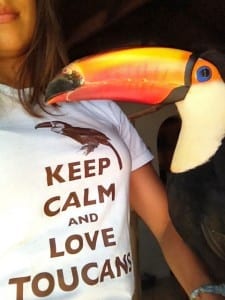 2 thoughts on “Learning from my Mistakes”