It’s that time of the year again in Toucanland – the hormones are back and the Three-Cans have mating on their minds. I’ve been reading a lot lately from other bird owners about what a bad mating season it’s been for people: lots of stories of aggression and other hormonal behavioral issues that have bird owners pulling their own feathers (ok – hair) out. While not without its added annoyances, I feel grateful that we are not just surviving, but thriving, throughout this mating season.

In the spirit of collaboration, I’d thought I’d share some of my techniques in managing hormonal behaviors with our three Toco toucans that has led to less drama and more peaceful interactions in our lives. While there are some basic similarities, each of the Three-Cans has their own unique quirks that require training focus on my end to maintain a positive relationship with them.

First and foremost, we ensure we are setting our environment up for success by removing anything that will encourage or inspire mating behaviors – this includes reassessing the games we play with the Cans this time of year. Toys and games that are typically not a problem for us can increase aggression if we’re not careful.

big boxes are a “no-no” during mating season

In training, my favored approach in managing mating season behaviors is redirection. Rather than creating a negative experience for the bird by punishing its behavior (whether it be by yelling “no!”/”bad”, forcibly taking things away, etc.), I instead redirect the bird’s focus onto more positive pursuits. This often feels like you’re breaking a spell by snapping the bird out of its hormone-induced fog and back into normalcy. It truly feels like magic sometimes!

Here are some examples:

Paz, our female, becomes very pre-occupied with her desire to mate this time of the year and shows little interest in much else beyond trying to entice the boys with treats through her wall and emptying her toy containers in a nesting-like fashion. We are mindful to not provide her with toy containers (boxes, bags, baskets, etc.) that are too large or cavernous to further add to their nest potential in her eyes. Even still, she has a tendency to become very defensive over her toys, attempting to attack us at times when we need to move them or replace their contents. 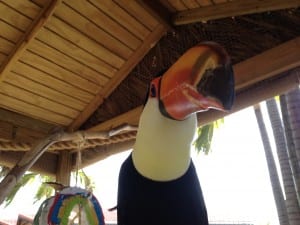 Watch out for Ms. Paz

In these moments, we divert her aggression by simply asking her to move away from the situation that is triggering her. I have target trained each of the Three-Cans and phased out the target stick long ago; now they understand that if I point to a spot and say “perch”, that is where they need to move to. When Paz gets combative with us for touching her toys, we target her to another perch (reward her), cue another learned behavior such as “spin” (reward her), and she calms back down and allows us to handle her toys without intrusion.

Pepe can be very Dr. Jekyll / Mr. Hyde during mating season. One moment, he’s as sweet as can be, taking treats and allowing me to kiss his beak and the next minute, he turns into his hormone-pumped alter ego, Little Dragon. While Little Dragon is still just as hilariously adorable as The Pepster (perhaps even more so in his tiny fury), Little Dragon is angry and wants to bite me.

This mating season, Pepe tends to get very territorial and defensive of his food bowls with me. For reasons I have not been able to determine, Little Dragon always makes his appearance at the lunchtime feeding. In order for me to access Pepe’s food bowls, I must reach my arm into his enclosure and under the perch where he is typically always sitting when the door is open. Most of the time, this is a non-issue and I can reach around Pepe all I want without him making a fuss. But when Little Dragon is in full swing, he’s prepared to defend his bowls with a wild snapping beak. To avoid getting bitten and, more importantly, avoid reinforcing aggressive behavior, I redirect Little Dragon’s attention with a game of catch. By enticing him with his favorite activity, Pepe quickly snaps back to his old self, happily tossing his toys and allowing me to exchange his food bowls without incident.

Paco, while typically our quietest Can, is much more croak-y during mating season, frequently calling out to me, his chosen”mate”, throughout the day. And while his croaks aren’t super loud like a parrot’s piercing screams, the monotony of it can still get aggravating, particularly because I am always worried that something is actually wrong. Most of the rest of the year, if the Cans are croaking, it’s because something (or someone) is upsetting them and I always go to check. However, during mating season, it is imperative that Paco doesn’t see me answering his call with my presence (read: rewarding him), which can increase both the frequency and the insistence of his croaking.

Beyond simply not rewarding it, the other way I minimize Paco’s increased croaking is by not encouraging any mating behaviors with me: I do not provide him with nest-like toys to “call” me to; I always redirect his advances and never allow him to hump me; I do not allow him to stick his head in my shirts (a nest-y behavior he tried to start this season); and I try not to encourage him feeding me.

A Toco toucan courtship behavior is passing food or other valued objects between their beaks. And while this is a toucan trait that I adore, it can get exhausting during mating season. This time of the year, Paco can get very insistent about wanting to give me things so I do my best to either ignore him (if I am outside of his aviary) or redirect his attention (if I am inside of his aviary). 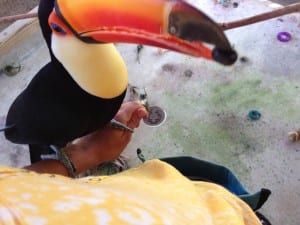 offering me his blueberry

When Paco wants to give me something, he will hold it in the tip of his beak and purr constantly until I take it from him. He then expectantly waits for me to give it back to him, so we can continue the courtship passing game. He can literally continue this for 20+ passes if I let him so to redirect his attention, I cue behaviors in between the passes and conduct an impromptu training session. Not only does this lower the number of repetitions in passing, but it re-focuses his mind on training and he’s learning much more quickly than usual due to the higher number of training sessions I’m able to sneak in. Win win!

For me, I’ve found that the key to making it through mating season without damaging my relationship with my birds is to keep things focused on the positive and remain highly vigilant that I’m not reinforcing any negative behaviors that could potentially continue once mating season is over. While it’s not my favorite time of the year, mating season is made manageable with training and we all come out of it just as close, if not closer, than we were at the start of it.