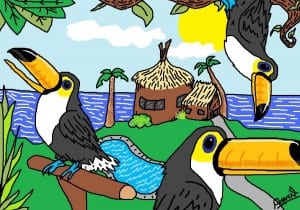 ~ thank you to April Hilary Rynold for this wonderful drawing of the Three-Cans!

When training with Paz and Pepe, the standard training fare seems to work well. They are receptive to the idea of training and seem to enjoy working for treats, so long as I keep things brief, upbeat, and within their comfort zone. Paco, on the other hand, tends to loathe anything that he does not consider fun. While all toucans are predisposed to a natural case of ADD, Paco is like an energizer bunny cracked out on Red Bull – always excited and almost impossible to wear out. Much of the time, no matter how enthusiastic I am for our training sessions, my zeal is only so contagious – his attention is fleeting and he is often easily distracted by other things that he deems more interesting. His desire for food rewards only goes so far. Fun takes precedence in Paco’s world, even over the most delectable blueberry.

This is not to say that Paco is lacking in intelligence in any way. I actually attribute his impatience with training to the fact that he is a very fast learner and grows impatient when things become too repetitive. Okay, admittedly he’s also a bit bossy and inflexible too but…, let’s just focus on his amazing aptitude for now. 😉 Where Paz and Pepe thrive with a consistent routine and a slow building of behaviors, Paco prefers things to stay fresh and always keep him guessing. But consistency is necessary to really anchor in any behavior when you’re training an animal so I am constantly trying to find ways to train with Paco on his terms. One such way I have discovered is by disguising training sessions into a game. 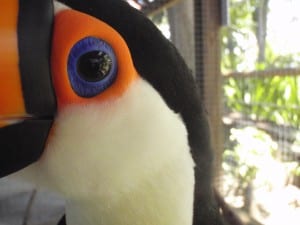 The first time I came to this realization was when I was working on training Paco to ride in his new backpack. Typical training advice suggested building on his target training base to target him into the backpack but he was having none of it. I’m guessing it felt too official for him and he couldn’t see a reason why going into the backpack would lead him to anything worth doing. But when I had the idea to turn hopping into the backpack into a round of fetch, he was sold. Almost immediately, the backpack changed from the main focus of a boring training session to a simple background prop in our thrilling new game. This breakthrough really got my wheels turning and ever since, during my playtimes with Paco, I have learned to keep on my toes and stay aware for any opportunities to sneak in some training time when I can. 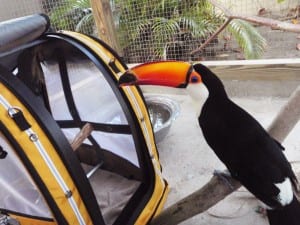 More recently, I came up with two games to amuse him with during our playtime to reinforce the behaviors of “drop-it” and “up”.

“Drop-it” has always been one of my top training priorities with the Three-Cans, particularly Paco. Toucans are extremely curious and love to touch anything that looks even mildly intriguing. The main problem with this is their tendency to want to throw things to the back of their throat – they don’t chew their food, they just toss and swallow. For this very reason, it is essential that I anchor in the behavior of “drop-it” so that in an emergency, they respond before it’s too late. Because Paco is the one who currently comes outside to play and inside the house for free time, I have been working to secure this behavior in his mind, as it is impossible for me to ever truly toucan-proof the outdoors. 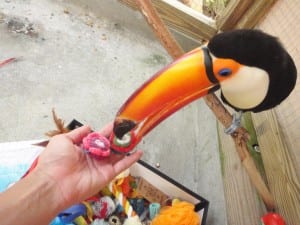 ~”drop-it” is an essential toucan skill

“Drop-it” became a game by pure happenstance. One day, during Bag of Wonder playtime, Paco was particularly delighted with a slinky. Because he is an enchanting toucan by nature, he decided to offer his prized slinky to me, his chosen “mate”, as a gift (see: The Top 10 Things I Love Most About Tocos). Spontaneously, I decided to give the cue for “drop-it” before accepting his gift and sure enough, he dropped the slinky into my extended palm. I clicked and rewarded him with a blueberry then quickly tossed him the slinky back to keep the momentum going. After two more times of this, I could see that familiar flash on his face as a light bulb went off and the game was born. 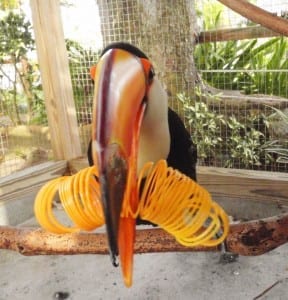 For the rest of our playtime, he excitedly waited for me to extend my hand and say “drop-it” (the cues), eager to comply and continue the course of the game. I have since used this game often to reinforce “drop-it” anytime he finds a new toy that holds his attention. I will also bring it up at random to test his consistency outside of playtime. Because he has successfully “dropped-it” so many times before and received positive reinforcement, the behavior is fixed well in his brain and rarely does he refuse when I give the cue.

“Up” became a training priority for two main reasons. For one, Paco had started to display his aggression with people by getting down on the ground and attacking their feet. Not only was this painful for the person on the receiving end and difficult to extricate themselves from, but it was also dangerous for Paco. Should someone trip over him trying to escape his assault, he could be seriously injured, even killed. 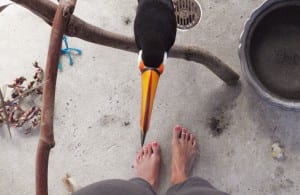 ~ Paco hates most feet excluding mine

The second reason for wanting to teach “up” was also safety related. Paco is currently obsessed with eating dirt and small pebbles whenever he is outside and began to stubbornly refuse to come off the ground when asked. This was an issue for me when I had him outside because I need him to be on his best behavior and reliably complying with my requests for his protection. By refusing to come up to me when asked, it set a negative, disobedient tone for our outside time – a precarious precedence. Additionally, I did not want him eating dirt in random areas for fear of fertilizers and insecticide in the soil which could make him very ill. So “no toucans on the floor/ground” became our new rule – the perplexing part was figuring out a positive way to reinforce it. 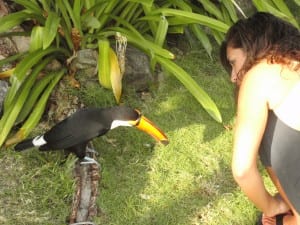 ~ no more toucans on the ground!

Because Paco already loved the game of “drop-it”, I decided to add an additional step to the game to include “up”. When Paco would have a toy he was excited about, I would cue “drop-it”. At that point, instead of rewarding him immediately after he successfully obliged, I would stand and cue “up” by holding my arm just above him (fun fact: toucans can hop up vertically!) and holding out the toy for him to retrieve. Once he had hopped up, mostly due to his crazed desire for the toy, I would click, reward, and place him back down on his perch to continue for another round. Not only was this effective in reinforcing “up”, but it also added some additional exercise into our game to wear my monkey out faster! To lock in “up” as a rule now that he is comfortably compliant with the behavior, I strive to be 100% consistent in never allowing Paco on the floor unless I’ve allowed him to be there. Because “up” is a positive game in his mind, he is always happy to hop up and now knows that “toucans don’t belong on the floor”. 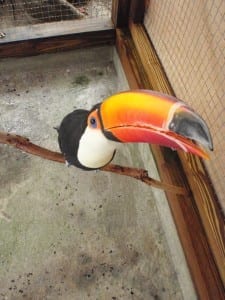 I’ve said it once and I’ll probably never stop saying it – training toucans is tricky. But while I may be working to train them, I also seem to be getting smarter in the process. Staying one step ahead of them requires thoughtful planning, sharp observations, and quick reflexes. But when training is just one big game, we all have a lot more fun in the process.