I recently discovered that there is a whole other me across the sea. Well, not me exactly, but we do share a lot of shocking similarities. We’re both brunettes. We’re both women. And – here’s the big one – we are both Crazy Toucan Ladies. That’s right, folks, there is another brown-haired woman out there who is just as obsessed with toucans as I am – although her obsession is sprinkled with a lovely British accent. 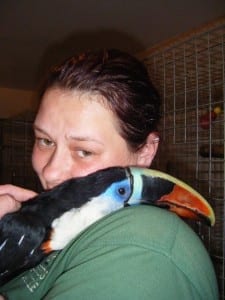 I’m sure you can imagine my delight when the mastermind website that is Facebook connected me with Mairee (pronounced like Marie) Vincent, a fellow female toucan devotee in the UK. Even more impressive, her toucan obsession is also her profession (she’s currently a zookeeper at ZSL Whipsnade Zoo) and she is in possession of a wealth of toucan knowledge from her studies all over the world. My immediate instinct upon connecting with her was to pummel her with toucan questions great and small. To prevent myself from appearing too obnoxiously nosy, I decided to use this blog as a clever segue into a legitimate dialogue on toucans (mwahaha!). My Toucan Lady counterpart graciously agreed to do an interview with Toucanland and now, not only do I have a new toucan friend, you do too. I am so pleased to introduce you to Mairee Vincent. 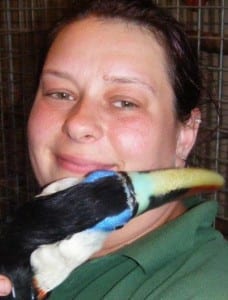 Hi Mairee! How did you first come to work with toucans? Was it a job you sought out or did you just fall into it?

I have worked with many species of animals, but mainly birds, throughout my career as a zookeeper, which began in 1994. I started off working with a wide variety of owls, eagles, flamingos, and Humboldt penguins. From there, the manager of the zoo wanted to expand into working with parrots and began teaching me all about keeping them. I was smitten with a Green-wing macaw – a Customs seizure and the first macaw that I had worked with. On that section, I worked with a range of cockatoos (Umbrella, Triton, and Moluccan), macaws (Scarlet’s, Buffon’s, Blue & Gold, and Green-wing), Franklins, and finches. It was then that I really started to get interested in birds. 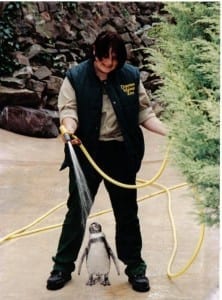 After working there for seven years, I felt it was time to move on and got a job at Leeds Castle Aviaries in Kent. Leeds had over 70 species of birds and introduced me to working with waterfowl species, lorikeets, softbills, and cranes. This is where I first got introduced to toucans and fell in love / became obsessed with them! There were two pairs of Toco toucans and a pair of Channel-billed toucans. Leeds was one of the only two collections in the UK that were regularly breeding toucans – the other being ZSL London Zoo. The more I worked with them and learnt about them, the more I wanted to find out!

What species of toucans have you worked with? Do you have a favorite species?

Leeds Castle unfortunately closed in March 2012 and all of the birds were relocated. Fortunately, I still work with our Channel-billed pair at ZSL Whipsnade Zoo. Our Red-billed toucan is at ZSL London Zoo, currently being paired up with a male. 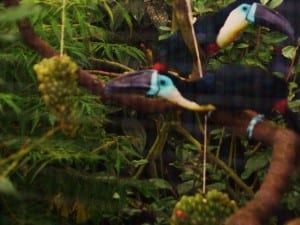 An opportunity arose to apply for a travel award for the Winston Churchill Memorial Trust Fund (WCMT). They provided full project funding for fellows carrying out overseas projects. I was fortunate enough to be one of the 100 people to have been picked out of the 775 applicants that year.

I spent 7 weeks out in the field gaining over 500 hours of field experience. Our main investigation was looking at the intestinal bacteria flora of wild toucans, however, as there is so little written about wild toucans, all information gathered was of great interest. From this trip, I came back with more questions than I went with and even more of an obsession.

You can view my full report for the WCMT here. 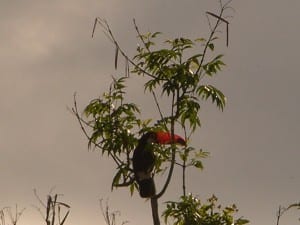 My next trip took me to Dallas World Aquarium, as they have the largest collection of species of toucans, toucanets, and aracaris kept in captivity and have bred over half of them, including a few world firsts.

After going to Dallas, I have worked with most species but regularly, I have worked with Tocos, Channel-bills, and Red-bills. My favorites have to be Tocos, although I also like some of the little barbets and toucanets – they also have big personalities!

What do you feel is the biggest problem facing toucans in captivity?

Toucans face many problems in captivity including iron-storage disease (Hemochromatosis), beak fractures, and parasites. While those are all commonly listed problems, the main issue seems to be bacterial disease. They suffer from acute negative bacterial infections which arise in the intestine and often prove fatal within 24 hours. In a captive survey conducted by Dr. John Lewis, 36% (5/14) of toucans died from Yersinia (mainly Y. psedutuberculosis). In order to manage these birds in captivity more effectively, this problem must be overcome. 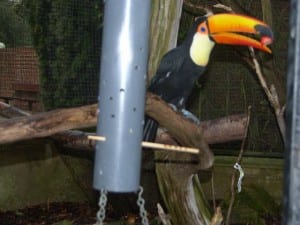 Do you recommend toucans as pets?

Toucans as pets can be very rewarding, however, I would recommend researching thoroughly before getting one. The main problem which is often overlooked with any bird is time. They are an intelligent animal and thrive on attention and activity. If you haven’t got the time to devote attention regularly, I wouldn’t recommend getting one. Also, given that one large bite of fruit takes 70 minutes to go through their digestive tract, you also need plenty of time for cleaning!

After studying Toco toucans in the wild, what was the most surprising thing you observed in comparison to your experiences with them in captivity?

There were lots of things that surprised me in the wild compared to captivity. One of the most interesting was when they raided other birds’ nests for chicks, they worked as a pair with one bird acting as a decoy whilst the other raided the nest. They would then go back and check up to a month later to see if the other birds had re-laid. 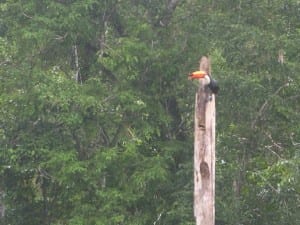 When I was asking locals about roughly how many toucans they thought they had as a population in the area, they all replied with 15, currently. I was surprised at their accuracy and questioned if they could be sure. I was told it was easy to check as out of the breeding season they all flew overhead in single file!

What is your favorite thing about toucans that makes you so passionate about them?

I have many favorite things about toucans – they are just so bizarre and quirky! I always want to know more about them. For example, it is only in the last three years that we’ve found out what their beaks do – something Darwin himself debated – and it turns out it helps regulate their body temperature! From nostrils in strange places, keel pads so their feet are up by their eyes when they’re born, tails on ball & socket joints, let alone their colourings and huge personalities – there is so much to discover.

Here’s a video exolaining in further more detail how toucans use their beaks to regulate their body temperature:

Can you give a brief overview of the worldwide questionnaire you are conducting? What do you hope to gain from it?

Toucans are a big part of my life – if I’m not working with them, I’m researching about them. After my trip, I conducted a UK questionnaire on toucans and also got offered a role advising for EAZA (European Association of Zoos and Aquaria) on in situ projects in the wild.

The nest step after the UK questionnaire was to go global! I am currently writing to all of the zoos, aquariums, and anyone that looks after toucans such as rehab centers, etc. I am looking to find out what people feed them so that I may analyze their diets. I am also looking at their accommodations, perching, husbandry, and also what deaths they have had. Hopefully by examining those causes I can try and determine the biggest reasons for deaths of toucans in captivity.

I’ve definitely had some interesting results back but so far, my favorite story is one of toucans which were housed with stingrays in a pond within their flight. The toucans kept finding rocks and throwing them in the water trying to sink the rays! 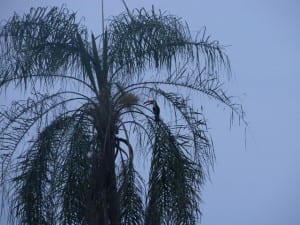 Thank you, Mairee, for taking the time out of your busy toucan lifestyle to chat with us. The more you talk, the more I just want to keep asking questions.  🙂  But I’ll stop here for now and hope for a Part 2 to continue the toucan chat in the future. Best wishes to you on your questionnaire and all of the other exciting projects you have underway!