I am delighted to announce that after nearly three months separation, we have been able to successfully reintroduce Paz and Pepe. The time has gone by impossibly slowly for us all, a true test of patience, akin to a child’s near-intolerable wait for Santa.

I spoke of the various reasons we had for needing to separate them in my last post in their relationship saga, The Predicaments of Breeding Birds. In short, the main things we were waiting on before we thought it would be safe to reintroduce them were: the conclusion of mating season; the full restoration of Paz’s health; and the completion of their molt. The last one we considered probably the most important on the list so that they would be fully-flighted with their mobility restored, thereby enabling them to socialize with each other safely and limiting the opportunity for injury from falling.

Thankfully, after a round of antibiotics, the removal of her nest log to allow time for her legs to heal, and some much-needed rest time to herself, Paz’s vitality came back in full swing within a couple of weeks. Then came the long, unknown time frame of waiting for both mating season and their molt to finish. 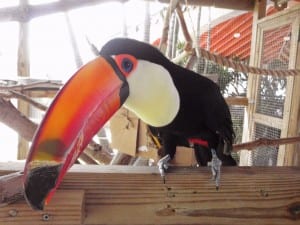 While there is never any exact time when mating season concludes itself, all three of the Cans have gradually stopped most of their hormonal behaviors, signaling an end to the season. The increased amounts of croaking spurts have ceased, Paco has stopped trying to mate with me (well, more specifically my legs and arms), and most of their courtship-specific behaviors and sounds have disappeared. Last came the final piece in the puzzle – the long wait for their feathers to fill in. Let me just say that waiting for a bird’s feathers to come in is like watching a pot of water as you wait for it to boil. The faster you desire for it to happen, the longer it takes. 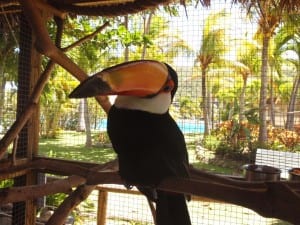 ~ waiting on my new feathers ~

What made the wait the most difficult was Paz and Pepe’s unfaltering commitment to try to be together. For the last three months, everyday, multiple times per day, they would attempt to feed each other in vain through their shared canvas wall, searching for a hole to see one another. It was heartbreakingly sweet and did nothing short of making me feel like a malevolent monster for keeping them apart. While in my human brain I knew we were doing this for their well-being, not out of Disney villain meanness, it didn’t soften the guilt of the choices that had to be made.

So as we watched the old feathers fall out each day, we would observe Paz and Pepe’s movements and assess their mobility. Finally (FINALLY!!) their wings were mostly filled in and they were both making more flights in their separate aviaries and moving about with much more confidence. The time had arrived to see if they were able to live together again so we took down the temporary canvas wall we had put up between their enclosures and watched in anticipation of how they would interact. 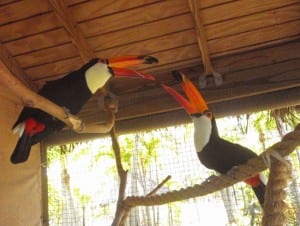 ~ feeling each other out ~

It was really a toss up as to whether they would be aggressive, excited, territorial, or mellow. Oddly enough, it ended up being a bit of all those things – actually very much like socializing them from scratch. I would have thought that the level of familiarity from 3 months ago would still be there, but instead, things played out much like they did when we first introduced them. They were tentative in sitting too close to one another and definitely had quite a few rounds of beak fencing whenever one of them would infringe on the other’s comfort zone. But thankfully, their same generally respectful demeanors prevailed and neither bird was overly dominant or hostile.

Watch Paz and Pepe’s first interactions after we took down the wall:

It has now been almost two weeks. The initial nerves have calmed down as they have readjusted to each other’s presence and all is peaceful with The Lovebirds. They are happily cohabiting – eating together, playing together, resting together. They have even resumed their training and interactions with us, the only change being that they seem much more contented and playful as ever. I’m feeling quite optimistic about their union, things are pretty solid now and I don’t anticipate any big issues in the near future. Knock on wood. Cross your fingers. Salt going over the shoulder. Wishing for the best – here’s hoping we never have to separate them again. 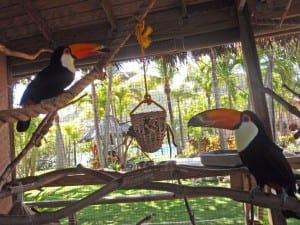 In case you missed any of the previous posts on Paz and Pepe’s relationship, you may visit…

– The Lovebirds Part Deux: Paz & Pepe are Shackin’ Up!

– The Wall That Hormones Built