Two weeks have past since we first introduced Paz and Pepe and their socialization has been incredibly smooth sailing. While they were a bit edgy in the beginning, they have since adapted to each other’s presence, movements, and habits. Their trust in one another has increased along with their comfort zone, as they now allow each other to hop and sit closer without feeling like they need to put on a defensive show with their body language. A lot of the initial bouts of intense beak fencing have subsided, now occurring only occasionally, tending to be briefer and not as emotionally charged with the getting-to-know-you nerves. 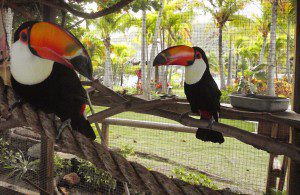 As we watched their relationship develop, we knew they would not be happy to be separated again. Even with the door between their aviaries open, they would spend all of their time together in the middle one, seeming almost hesitant to pass through the door to the other side for fear that it may close them apart. We decided it was time to take down the wire wall that divided their enclosures to give them a larger, more appropriate space for two to share. In doing so, we added a few more perches and manila rope to connect the aviaries and encourage them to spread out and enjoy the full 15ft long expanse. 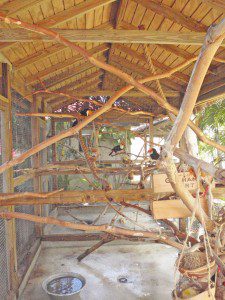 Expanded Aviary for the Lovebirds

They have definitely been a lot less interested in interacting with David and I – or anything for that matter – as they are in one another. They haven’t been playing with their toys much at all and haven’t even expressed any interest in playing the Bag of Wonder game with me, which is usually one of their most beloved times of day. But I’ve been through this before with other friends and am trying not to feel too rebuffed. As the newness wears off, I am seeing a light at the end of the tunnel – Pepe and I had a rousing game of catch yesterday and they have both been quite enthusiastic for their last two training sessions.

Here is a tour of the newly expanded aviary with Paz and Pepe together:

They’re in it together

Paz and Pepe have gone from living two separate lives to becoming a team. They coordinate their schedules and do most everything in conjunction – if Paz goes to eat, Pepe hops down for a bite; if Pepe feels like a nap, Paz cozies down on her perch to relax as well; if one of them starts croaking about something concerning, the other hops right in to show their support. It’s that strange phenomenon that occurs with new couples who have merged so cohesively that you can almost no longer remember them as separate entities, even if it has only been two weeks. 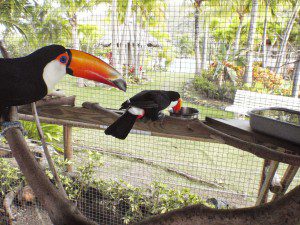 They’re shaping each other to their ways

Now that they are so often sharing their treats, they have adapted their preferences to suit one another. Paz used to theatrically reject the red apple pellet treats whenever I would offer them to her, spitting them aside in an open display of distaste. But suddenly, now that Pepe gives them to her, she has developed a hankering for them. Pepe, who has never been one to choose blueberries over the aforementioned pellets, now chases me down for them, as they are the prized offerings for his sweetheart.

Paz, like so many women, is also trying to change Pepe’s less-than-hygienic boyish bathing habits. While Pepe still continues to attempt to bathe in their top drinking pans as he and Paco have always done, Paz chases him away each time he hops in, and attempts to shove him down to the main lower bathing bowl. I can certainly understand her dilemma – no matter how smitten I may be, I wouldn’t want my boyfriend sticking his butt in my drinking water either! 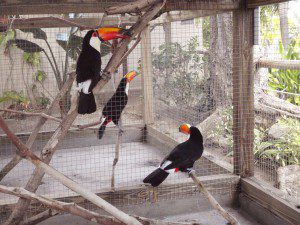 They can’t keep their hands off each other

Paz and Pepe have been displaying quite a few courtship behaviors – the toucan equivalent of dinner, movies, and second base. They have both been passing treats and toys between the tips of their beaks, chasing each other and purring whenever they have something they think will appeal to the other. They have also been engaging in some light beak-fencing, which often turns into beak-holding, melting my heart as I anthropomorphically compare it to hand holding. Pepe has also been lightly preening Paz’s neck and head as she closes her eyes and purrs with contentment. 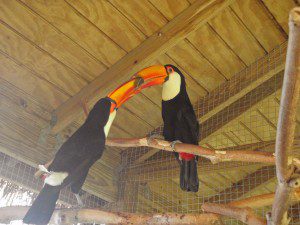 They have been (literally) feathering their nest

Cliffhanger – too many details to share here – more on the Three-Cans’ new nest logs in the next post! 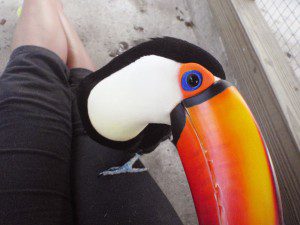 This has quickly risen to the top of peoples’ frequently asked questions about the Three-Cans – why is Paco separated from the other two? In short, because he is a tough guy who would most likely bully them. Everyone tells me how badly they feel for Paco and how his life must be so lonely and sad. I admit, I had the same worries at first, guilty that he was not able to share in the space and companionship that Paz and Pepe were enjoying. But in all reality, Paco is getting even more of my attention than before, which is the root of his desires – undivided attention and to be doted upon in a gushing fashion (lucky for him, my specialty). Plus, he now has not only Paz, but Pepe too, with whom he shares a wall and can interact with throughout the day. If you ask Paco, things are not too shabby lately.

6 thoughts on “The Lovebirds Part Deux: Paz & Pepe are Shackin’ Up!”