Socializing Paz and Pepe has been an incredibly interesting experience so far. Tomorrow will mark one week since we first introduced them and I already feel as though I have gained an abundance of valuable knowledge about Toco toucan behaviors that I did not possess before. Because I have never had the pleasure of watching Toco toucans living together, I am learning so much as I observe their interactions with each other. 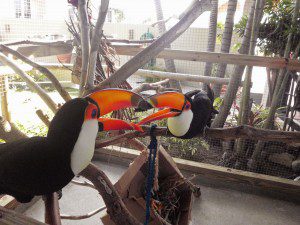 I wrote a post a few months ago on Reading Toco Toucan Body Language. As I watch Paz and Pepe together, my initial observations have been reaffirmed, as well as added upon. Here are some new insights on toucan body language, this one focused on courtship behaviors.

In this picture above, both toucans are quite alert and engaged in interacting with each other. Paz is a bit more relaxed and showing interest in Pepe. Pepe, on the other hand,  is in full defense mode, stretching his body as tall as possible and tilting his head back in an effort to make himself look large and threatening. 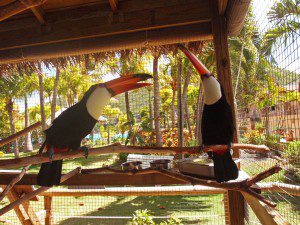 In this next picture above, you can see Paz has moved from simply showing her interest to aggressively encroaching on Pepe’s space by leaning her body towards him and opening her beak, ready to challenge Pepe in a round of beak fencing. Pepe’s body language has become the pinnacle of defense with his head tilted fully back, his beak pointed straight upwards to appear as tall as possible. 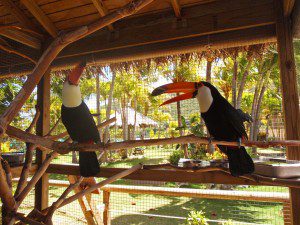 In this picture above, Pepe has moved from an idle defensive stance to an engaged defensive gesture to push away Paz’s advances. Paz is now in the more submissive role, beak held high in defense and body leaning away from Pepe. 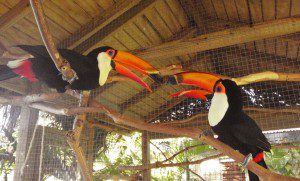 The toucans are surprising silent prior to engaging in a round of beak fencing. I had learned through my early interactions with them that they will use their purring sound as a warning communication for me, but I am surprised to find out that they do not do this with each other. They never purr prior to or during the seemingly aggressive beak fencing moments, saving the purring for when they have a treat or toy in their beak that they desire to share with each other. Often before, or sometimes instead of, beak fencing, they will silently wave their open beaks together almost like a coordinated dance, without snapping, as seen above. 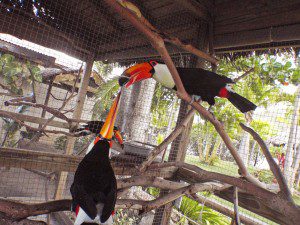 A courtship behavior in Toco toucans is for the male to pass the female food from his beak. When they want to show the other that they wish to share what they have, whether it be a treat or a toy, the giver, in this case Pepe, will hold the item in the tip of his beak and purr constantly, leaning it towards the female. The female, in this case Paz, purrs in reply and leans in slowly as she gently tilts her beak to accept the gift, as seen above. 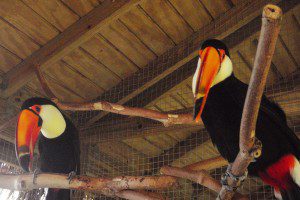 Another interesting observation that I have noticed is a similar expression that I experienced when socializing my two adult cats together. Cats show trust in each other by squinting their eyes, yawning, scratching themselves, and otherwise seeming to ignore each other. For cats, this is the ultimate show in faith because they are putting themselves in a vulnerable position in another cat’s presence. Paz and Pepe have also demonstrated similar behaviors. While they are still quite guarded around each other, I have noticed that they will also display these forced casual behaviors to belay a sense of trust or easy-going companionship. After a heated interaction, they will frequently separate a small distance then yawn, scratch their head, and/or preen their wings. In the above photo, Paz has her head tilted in her signature sweet, mellow way and Pepe is working to seem relaxed, preening himself. 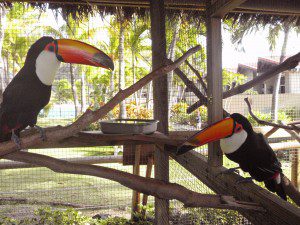 With each new day come untapped discoveries for me about my ever-mysterious Toco toucans. I feel beyond lucky to be their humble witness, raw nature carrying on in my own backyard.