We are currently experiencing our first mating season with Paco, Paz, and Pepe. We began to notice changes in their behavior in February and are unsure how much longer the hormonal hi-jinks will continue. Sources on the mating season of exotic birds vary but I have heard that this could continue all the way through September. 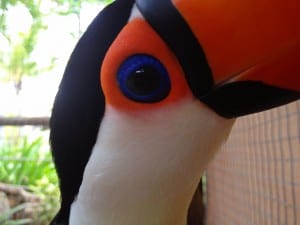 Studying the birds during this time of year has been particularly interesting because we are getting to observe and participate in both sides of the mating game – with a bonded pair (Paz and Pepe) and with an individual “pet” (Paco). Paco has selected me as his “mate” and therefore exhibits all of his mating expressions with me.

The Sharing of Treats & Toys

It is a Toco toucan courtship behavior to pass food in between their beaks, usually the male offering the female a food gift prior to mating. The gift can be passed back and forth several times until the female ultimately accepts it. Pepe frequently attempts to offer Paz gifts of all kinds ranging from pellets, fruit bits, treats, and even toys. Depending on her mood, she will either sweetly accept it or will turn her head and hop away to ignore him, often with him trailing in her wake, seeming to scream, “please, TAKE IT!” (see the vocalization in the next section). 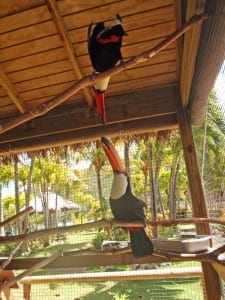 Paco has also become much more insistent about feeding me lately. Often when he sees me headed his way, he will grab a piece of fruit from his bowl and begin bouncing around and purring, simply dying for me to take it from him. Upon entering his enclosure, he will race onto my arm, purr wildly, and insistently shove his gift towards my mouth or hand. I will take his treats in my hand and pass them back and forth with him.

Depending on how insistent he is will his gift giving, we will pass back and forth for sometimes as many as 10+ times before eventually either he will swallow his food or I will have to pretend to eat it. I say “pretend” because often times his fruit bits have already been swallowed and since coughed back up and as much as I love my Paco Taco, I am averse to eating his partially digested food (no offense intended to the aforementioned toucan).

Here is one such example of Paco giving me his treats. This is a short one, with him only passing it to me a couple of times before eating it himself:

We have heard some surprising new sounds coming from the Three-Cans this time of year, whereas before, we only thought they had the two vocalizations – their purring sound and their croaking sound. Not so. As it turns out, they have the ability to make several other strange noises to add to their mating repertoire.

Paz and Pepe’s craziest sound is still one that I have been unable to catch on video. They make a noise akin to what I would imagine would be an effort to exorcise the demons from their nest, as they only do it during nest preparation times. Pepe has also started to make a chuffing sound for Paz, often when he is trying to provide her with a gift and she is not readily accepting it.

You can hear his noise here as he desperately tries to give her his favorite toy:

Paco has also begun making some foreign noises. Right before he wants to be snuggled or when I am near his nest and he is trying to coerce me inside, he makes a soft whining sound, almost to the pitch of “eeeeeee”, similar to a dentist’s water pick. During the times I am petting him, he makes another type of soft, contented purr, as he closes his eyes to soak up the love.

Since we provided the Three-Cans with nest logs, there has been a lot of energy put forth on their part in prepping them, protecting them, and spending time in them. All three of the birds will often take fruit to their nest, held in the tip of their beak, and appear to be practicing feeding by perching on the entrance hole, purring, and bobbing their head up and down inside the nest. I’m guessing this is solely a dress rehearsal because they never drop the fruit and ultimately end up eating it themselves once they hop back down. 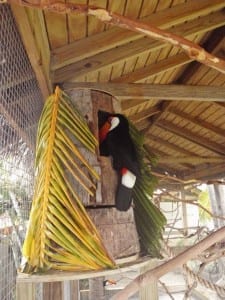 I have read that toucans will call each other to the nest by slapping their beaks side to side on the nest log’s entrance. I have noticed that Paz and Pepe mostly do this to announce their presence when the other one is already in the nest. Paco, though, has become quite enthusiastic lately about calling me to his nest. He often watches my door and once he sees me emerge, he races to his nest, perches on the entrance, and alternately purrs and slaps his beak back and forth in what I am assuming is an invitation for me to join him.

Here is a video of Paco, already inside his nest, welcoming me in:

Paz and Pepe have been mating, mostly in the mornings and evenings. They are definitely not private about it and have gone so far as to mate directly above me as I am scrubbing their floor (and yes – I moved.). As you may have seen in Our First Egg Adventure, they have been successful at producing eggs and continue on in their quest to further their Toco race. 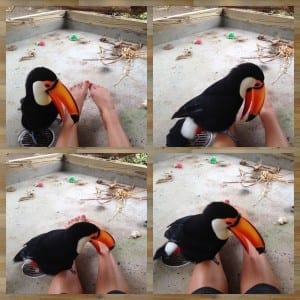 Paco, on the other hand, has been trying to mate with me a bit. He seems to be particularly attracted to my bare legs (I often wear shorts here in the sunny Caribbean) and he will attempt to hump them like a dog, if the opportunity presents itself. I have to admit, I am both surprised and vaguely flattered, as I’ve never considered my legs to be my best feature. The only way I can rationalize it is that perhaps to him, in comparison to his short little toucan legs, mine may as well be the tan, lengthy gams of Barbie (ah, if only the world could see me through his eyes! 😉  ) Nonetheless, I do my best to not encourage this and simply redirect his behavior by picking him up and distracting him by cuing a trick or providing a new toy. Thankfully, he quickly forgets his amorous moment and has yet to get frustrated towards me for stopping him short in his tracks.

Here is Paco attempting…well, you know… 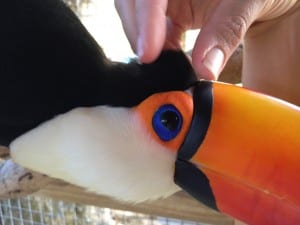 Paco has become incredibly cuddly lately, often wanting to spend upwards of 10 minutes at a time, multiple times each day, getting pet and smothered in kisses. I am not certain if this relatively new propensity for snuggling is due to mating season or if we have simply reached this point in our relationship, but either way, it is one of the potential side effects of mating season that I hope doesn’t end when Summer turns to Fall. While it’s tempting to smother Paco with what I consider appropriate affection all over his tiny toucan body, I try my best to limit my petting to his head and neck, as I have read that other places on birds can be interpreted sexually.

I was finally able to catch a bit of Paco snuggle time on video, although you can tell he is a bit distracted by the camera (he usually closes his eyes and lays his beak on my shoulder) – I guess he likes to reserve this as our private time 🙂 …

I once saw a comment posted by someone on You Tube referring to their bird’s random freak out moments as UBEs – Unidentified Bird Emergencies. I thought this was both hilarious and acutely applicable, so we implemented the term immediately here; although for us they are UTEs – Unidentified Toucan Emergencies.

Outside of mating season, if the Three-Cans engage in a bout of concerned croaking, it is typically pretty obvious what they are expressing their displeasure about – kitesurfers (Official Arch Nemesis of the Three-Cans), big barges too close for comfort, or otherwise annoying children yelling in their general vicinity. Usually, they are comforted by my presence and will quiet down almost immediately. But during mating season, we are now experiencing more UTE moments – times where the Three-Cans croak for no discernible reason, at least within the confines of my limited human perspective.

Here is a prime example of a UTE:

Paz and Pepe have had their moments this time of the year when they have become aggressive towards us, which is certainly understandable now that they’re nesting and are wound up emotionally in the potential of future babies. We have continued our training to maintain our relationship, but do tread lightly when we can tell they are in an anxious mood.

While Pepe is usually our most easy going-can, he has his brief stints where he decides he does not want us to touch his toys or his food bowls, racing over to try to peck or bite in defense of his property. Paz, who is ordinarily a bit more on the timid side, also has her moments of bravado where she decides to not allow me near her things. This is when it is especially important to pay close attention to their body language and exercise more caution than we usually do. Whereas I can normally allow Pepe to bounce around right up against me as he so often fearlessly does, I am now more prudent with how close I allow him to my face and stay alert to his energy. In times of aggression, we simply redirect their behavior onto something else and give them their space. 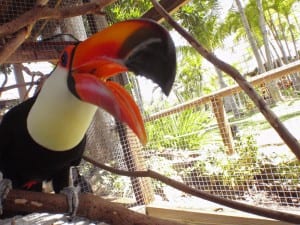 Paz and Pepe also have their times with each other where one of them will inadvertently aggravate the other, leading to bursts of beak fencing. We always keep a close watch on the pair, but thankfully it never escalates past a short-lived lover’s quarrel.

Paco, on the other hand, has shown absolutely zero aggressive behavior towards me, his “mate” – if anything, he has become closer and even more tolerant of me. He still continues his defensive attitude towards David, although this is certainly nothing specifically attached to mating season, but rather a constant training battle we are working on. 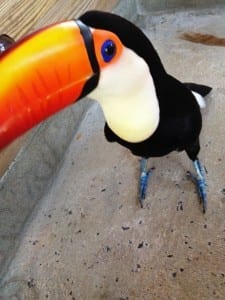 Overall, things haven’t been as challenging for us in comparison to what I have heard others are dealing with during this crazy time of the year with our feathered companions. A friend’s toucan is currently raging through their household, chasing her chosen human “mate” down with such fortitude, he is having to leave the house during her waking hours. While we do consider ourselves lucky to not be encountering such serious issues, I have to admit, I am looking forward to the end of mating season – if only so the humping and overall moodiness shall come to pass.