Toco toucans, unlike some of the other toucan species, are actually a very quiet bird. For the most part, they enjoy their day in peace and quiet, only making noise when they are happy or scared by something in their environment. This relatively noiseless feature of theirs is actually one of the main reasons we can have them residing on our little island with us. Personally, we would love to have an even larger flock including a few macaws and/or other parrots. However, our small rock also hosts 8 resort rooms and tourists on holiday generally do not care for the noises of squawking parrots each morning at sunrise. Believe me – I don’t get it either. Who wants to sleep in past 6am on vacation anyway?! But alas, toucans rule here because they can keep it mum. 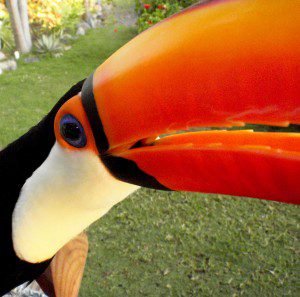 As a toucan owner, the question you will be asked the most by a landslide is “do they talk?”. Unfortunately, no, they do not have the ability to form words as parrots do but they do communicate in other ways. Adult Toco toucans make two different noises to express themselves.

The predominant communicative noise they make is what I refer to as their purring sound. It’s pretty much impossible to imitate, even if you practice tirelessly each night before bed – which I don’t, just in case you suspected otherwise. They mostly make this noise when something pleases them – a treat, an interesting toy, the sight of me… 😉 They also use this noise as a warning. For example, if I do something they don’t care for or if I startle them, they purr at me as if to say, “hey- watch it, you’re fixin’ to get yourself bitten, Missy”. In the beginning, it took some time for me to differentiate between the loving purrs and the warning purrs, but I have since figured out how to read their body language. A strong peck to the gums also helped solidify this lesson.

Watch and listen as Paz purrs with love for the Toucan Lady here: httpv://www.youtube.com/watch?v=2bl4OQzQZMM

The other noise they make is what I call their croaking sound, which they do when they sense danger. The best way I have found to describe this noise is a cross between a frog and a pig. A “frig” noise, if you will. Typically, Paco and Pepe are the two biggest frig-makers, joining each other for a round of croaks to alert the flock when something seems amiss. Paz will generally only hop in once she discovers their concern to be legitimate. Otherwise, she lets the other two numb-skulls expend their energy without her participation (her words, not mine!).

What does a “frig” noise sound like? Watch Paco demostrate the Toco croak here: httpv://www.youtube.com/watch?v=fKV6mlA8H0Y