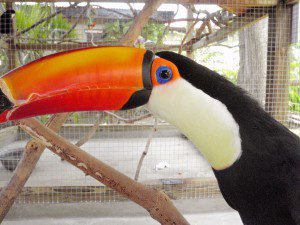 I am generally quite adept at reading people, mostly due to the fact that we belong to the same species (although, sometimes there are those people out there that I find this harder to believe than others). But in our toucan beginnings, I felt pretty clueless as to how to interpret the actions of our Three-Cans. Because they cannot pin their eyes like parrots and do not have large head crests like cockatoos, their body language can be much less obvious. Over the last 5 months, between trial & error and spending time observing our birds, I have reached a better understanding of toucan body language and at the same time, they have learned to interpret mine.We have adjusted to each others’ movements – they have discovered that when I go to kiss them on the belly, I am not planning to eat them and I know that if they open their beak and purr at me, they are warning me to choose another path or pay the toll with a peck.

Here are some of the body language cues I have observed with Paco, Paz, & Pepe… 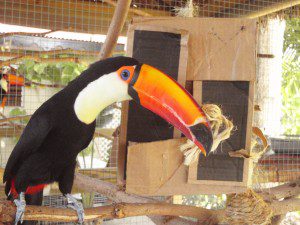 When the toucans are intrigued by something, they will crane their neck and lean one side of their head towards whatever they are interested in, in an effort to get a better look. 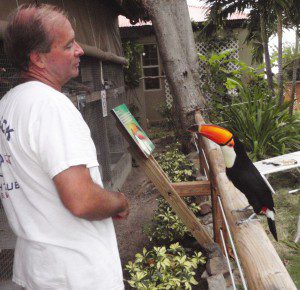 Defensive behavior is mostly only exhibited by Paco. When he is fearful of something, his natural reaction is much more “fight”, while Paz & Pepe tend to be more “flight”, doing their best to avoid whatever they qualify as danger. Paco tends to be a bit territorial and doesn’t take well to most others besides me encroaching on his personal space. We’re working on getting him better socialized, but in the meantime, poor David’s head is taking the brunt of it. When Paco is behaving defensively and/or aggressively, he stretches his body and looks almost as though he is on his tip-toes, as we humans say. In an effort to appear even larger, he also cranes his neck and lifts his beak up high, ready to peck if anyone gets too close. 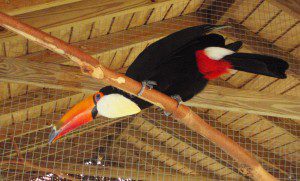 When something concerns the Three-Cans, they duck their heads low, making their bodies long and perpendicular to their perch. They bob their necks up and down, scanning the skies for trouble. This is usually always accompanied by a chorus of their trademark croaking. 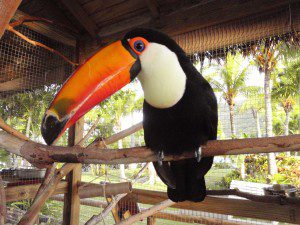 When the Trio is relaxing and feeling at ease, they will puff up their feathers and hunker down on their perches, often with their feathers covering their toes. To me, they look like they’re curled up in a blanket of coziness. This is when they are bestowed the nickname, Fluffy McFlufferton. Trust me, it fits.

I believe that an increased level of trust, as well as a better understanding of each other’s body language, can be credited for the fact that it has been a long time since I have been on the receiving end of a peck or bite. Getting to know our birds and how they display their emotions has been incredibly rewarding and is also helping the progression of their training and socialization.