Toco toucans, and really, all birds for that matter, are not known for being neat and tidy eaters. Toucans in particular love to toss their food in the air and back down towards their throat, so it is only natural that a portion of it not quite make it to their stomachs and end up on the ground instead. It’s really not of any concern to us, as our Three-Cans reside outdoors and their enclosures are simply hosed out each morning. But if you ever plan on keeping a toucan with you indoors, just be prepared to spend some time lovingly scrubbing fruit goo off your floors.

As I have mentioned in some of my past posts on Pepe’s progress, he has come a long way since we first adopted him in both confidence and coordination. And while his eating skills have improved over the last 5 months, Pepe is still noticeably our messiest eater. But before you start referring to him as “the sloppy one”, you must understand that it’s really not his fault. And I don’t mean that in the same way your 9 year old son does to explain away his slovenly room. Pepe is, in fact, physically built with a slight disadvantage towards ease of munching. 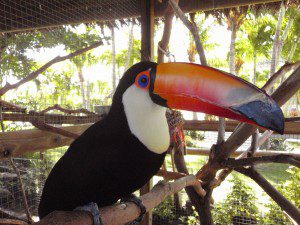 Pepe’s beak is shaped differently than most other Toco toucans I have seen (in pictures, that is). Paco & Paz both have what seems to be the standard Toco upper mandible – curved downwards and meeting the bottom mandible to form a point. Pepe’s upper mandible, by contrast, is very flat bottomed and blocky. It also extends beyond his bottom mandible, giving him the ever so slight appearance of an overbite. I had initially thought that this may be indicative of Pepe being a female since many sources claim this to be a trait characteristic of female toucans, but alas, bloodwork has since proven that theory incorrect, at least with our toucans.

To help you compare… 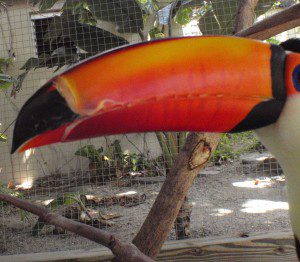 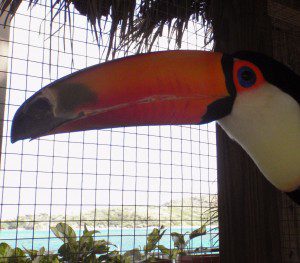 As you can see in the picture above, Pepe has a good 1/2 inch open space between the tip of his upper mandible and his bottom. This is what makes eating a bit trickier for him. For Paco & Paz, it is very easy to delicately pick out even small pieces of fruit and pellets between the tip of their beaks. But Pepe must manage to get his food further back down his beak in order to obtain a good grasp. Otherwise, it simply falls out. You will also see him picking up his toys by leaning his head and grabbing them sideways, instead of from the tip. 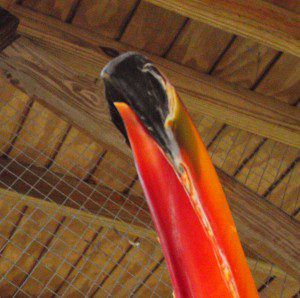 Pepe’s beak from below

Whether or not this is a genetic deformation, I have no idea. I may have initially speculated this to be a disadvantage, but it actually seems to only make Pepe more determined. While more of his food ends up on the ground than the others, even still, more of it ends up in his belly – he may be the messiest eater, but he is also the most voracious, consuming more than Paco or Paz each day. I also am very endeared towards this quirk of his as I believe it only adds to his goofy, yet still stunning, appearance.

Here is a little video to give you an idea of how Pepe eats: