Today we continue in my series of special feature toucan interviews with Rafi, a gorgeous representative of the Collared aracari species. This will probably conclude the series for the time being, unless we find any other toucan friends with interesting species of toucans who wish to share their lives with us. Just in case you missed them, you can check out my previous interviews with Touk the Green Aracari, Pixie the Swainson’s, Pogo the Keel-Billed, Yoshi the Emerald Toucanet, and The Curl-Crested Aracari Crew. 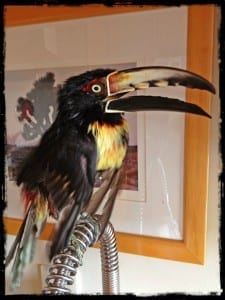 Collared aracaris are among the smaller species in the toucan bunch, considered a toucanet, generally weighing around 6.5 ounces at around a foot long. They are not endangered and are a highly visible, prevalent species in their native territories across Central America, moving about in small flocks of 6 or more birds. According to Emerald Forest Bird Gardens, they are “the most common toucanet in American aviculture today, thanks to its importation in good numbers since 1995 and its willingness to readily breed in captivity”. Known for their friendly, cuddly personalities, they are one of the toucan species most easily kept as pets.

Rafi is a 4 year old Collared aracari that resides in San Francisco, California with his beloved human companion, Emily. I met Emily through her sister, Tonia, who is owned by Pogo the Keel-Billed toucan. From his sweet, easy-going nature and his rugged good looks, Rafi is certainly one I consider to be a model toucan, representing toucans everywhere with all the best qualities that a toucan has to offer. 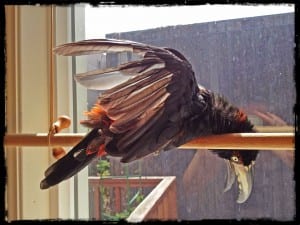 Hi, Emily! How did you first become interested in toucans? How did you come to adopt Rafi?

My family and I had smaller psittacines while I was growing up – peach-faced lovebirds, cockateils, and parakeets. While I have always loved birds, I did not initially set out to adopt a toucan and the means by which I acquired Rafi are a bit unusual.

I accompanied my sister and brother-in-law down to Jerry Jenning’s Emerald Forest Bird Gardens in San Diego County one weekend, as I was interested in seeing his set-up and meeting some of the various toucan species that he had available. My dad and aunt also live in the same town, so that was extra-incentive to go down that weekend.

While hanging out in the nursery, I became enamored with a beautiful, loving Triton cockatoo named Chewie, who was about a year old. I didn’t have any expectations that I would be adopting a bird, but I fell totally in love with Chewie. After getting back home and thinking things through more clearly (as well as considering the wise advice of my sister and others), it became rather obvious that a large cockatoo would be a terrible choice for me. Living in San Francisco, I have close neighbors on both sides with common walls. I also travel frequently and sometimes work long hours. It was clear that a cockatoo would not be a good fit.

So, realizing that I really did want to add a bird to my life, but not necessarily a cockatoo, I began to look at other options. It seemed like an aracari would be the ideal bird for me: quiet, independent, loving, gregarious, and unlikely to bond with solely one person. Fortunately, Jerry had this little 6 week old Collared aracari available at exactly the right time and that’s how I came to adopt Rafi. 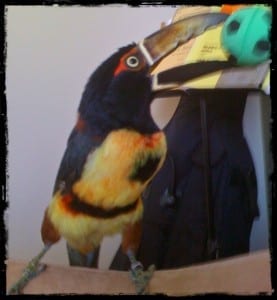 He was just 7 weeks old when I brought him home, so I did twice-daily formula feedings for the first two weeks to supplement his fruit and pellet diet. When Flavia, one of the Emerald Forest employees, handed me Rafi the day I went to pick him up, she said he was the “sweetheart of the nursery”. He really has been the ideal pet. I am extremely lucky.

Your sister, Tonia, adopted Pogo the Keel-Billed toucan at the same time as you were adopting Rafi. What made you decide to adopt a Collared aracari, rather than a larger toucan such as Pogo?

Besides the significant financial investment of purchasing a large toucan, I was also not ready to take one on due to space reasons. I didn’t have a good place to put a large aviary. Noise was another reason. As mentioned above, I have close neighbors and frequent croaking or yelping may not have been very well received.

Tonia & I laugh at how different our two birds are. These differences were not readily apparent when we first brought them home, but have become so pronounced as they’ve gotten older. Rafi is snuggly, loves everyone, travels well, and can be a bit timid. Pogo is super active, smart, gets into everything, and can be extremely temperamental, aggressive, and moody – especially in the spring. I have not experienced any of the hormonal angst with Rafi that Tonia and Armando have with Pogo. I am thankful for that. I’m not even sure Rafi is a “he”, as the Collared aracaris are not sexually dimorphic birds and I never had him sexed. 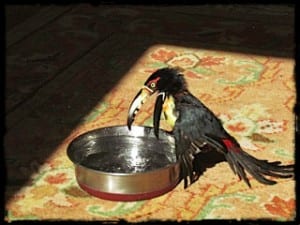 What is a typical day in your life with Rafi like?

I wake up around 5:30 am to go to work. Raf sleeps tucked in a towel, fleece, or other sweatshirt next to my bed. I usually let him sleep in a little, then he gets up and hangs out in the kitchen on the sink faucet while I chop his fruit and prepare his Mazuri pellets. While I am getting ready in the bathroom, he loves to perch atop my shower or the door of the medicine cabinet. His favorite pastime is pulling various things off the shelves and throwing them down in the sink. He gets tucked in his large cage with the radio left on for him during the day. I also leave treats in some foraging toys in his cage to help pass the time. 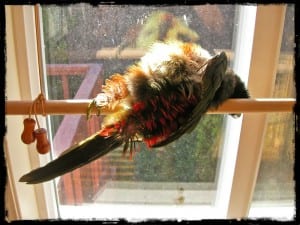 Unless it is really overcast and cold, Raf reliably takes a daily drenching bath in a large bowl, which is usually a 30 minute ritual from start to finish. He absolutely loves water. Depending on my day, I am home from early afternoon to late evening. On days I work late, my mom will stop by to have a “Granny Bird Day” where she lets Raf out to bask in the sunshine and fly around my house for several hours.

When I get home, Raf has free reign of the house. He usually gets some sort of evening treat – a bit of hard-boiled egg, blueberries, or a small piece of cheese. He shows a lot of interest in whatever I am eating or preparing, probably more for social reasons than anything else. Just the other day, I had finished making chicken tikka masala and he flew to the stove and grabbed a large piece of chicken off my plate. I had to wrestle it out of his bill. He was unhappy about that, but I quickly diced up a cherry instead and he seemed reasonably pacified. 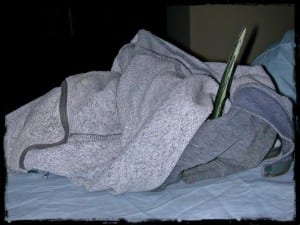 Rafi, tucked in for a good night’s rest!

In the evenings, usually around sunset, he loves to tuck into my sweatshirt or fleece jacket and fall asleep. Once he’s asleep, I wriggle out of the jacket and tuck him in for the night.

Have you trained Rafi to do any special behaviors? If so, was it difficult?

Not really. He will fly to me and land on my outstretched arm while I am getting ready in the bathroom in the morning. Raf has sort of learned that there are “designated pooping areas” in the house – certain perches and over the sink. Unfortunately, he doesn’t necessarily poop in those places all the time. It’s a work in progress. I was trying to train him to catch a small cat ball, but lately, he seems to be afraid of many of his toys. He’s very fickle that way.

What is your favorite thing about aracaris?

I love the sweet disposition and snuggly quality of aracaris. This seems to be pretty universal, at least in the aracaris I’ve met. While my friend, Jeff, was renovating part of his house, his two Curl-Crested aracaris, Oskar and Rocky, both spent some time living with Rafi and me on separate occasions. I can say from experience that both of his Curls are equally as sweet and loving as Rafi is with huge personalities. 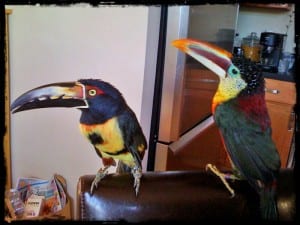 I also love Rafi’s vocalizations. He makes this endearing chattering sound every time I come home from work or when he hasn’t seen me for a little while. His alarm call / “don’t mess with me” vocalization is also funny – kind of a higher pitched , stuttering sound. He makes it reliably when I pull the plastic wrap container out from my kitchen drawer. Funny bird.

Would you recommend an aracari as a pet? What would you tell someone before they chose to adopt one?

I would highly, highly recommend an aracari as a pet – probably more so over a larger toucan, given what I have observed from other’s experiences. I would definitely tell someone planning to adopt an aracari to be prepared for a bit of a mess. Rafi has definitely earned his nickname “blender with no lid”. Be ready for lots of fruit-flinging and pooping. Fortunately, my couch is made of stain-resistant fabric and I have hardwood floors, which helps with the clean-up, but the clean-up is constant. I am continuously wiping down my window sills, floors, and scrubbing Raf’s cage, etc. Just as I seem to complete the circuit, I start over again. I should buy OxiClean by the vat at Costco.

Also, be prepared to chop fruit every morning. This has become a daily ritual that is programmed into my morning routine. In fact, when I am on vacation or traveling, I feel like my morning isn’t complete if I’m not dicing papaya, banana, grapes, etc. Also, it helps to have a good, reliable birdsitter who doesn’t mind taking on these tasks while I am away from home. 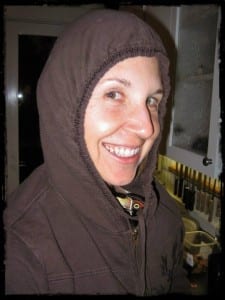 Thank you very much Emily for taking the time to share your wonderful life with Rafi with us! All of the pictures in the post were provided by Emily.