My series of toucan species interviews continues with one of our tinier cousins. Just in case you missed them, be sure to check out my other interviews featuring our friends, Touk the Green Aracari, Pixie the Swainson’s, and Pogo the Keel-Billed. Today, we have the pleasure of hearing all about the darling life of Yoshi the Emerald Toucanet.

Emerald Toucanets are pint-sized versions of the larger toucan species, generally weighing as little as 6 ounces and measuring a mere 12 inches, including their beak. While all Emerald Toucanets have mostly green bodies, other plumage and physical characteristics can vary depending upon which of the 7 sub-species they belong to. They are well dispersed throughout the mountainous regions of Southern Mexico and Central and South America. 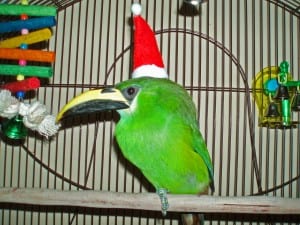 Yoshi the Emerald Toucanet lives in Long Island, New York with his adoring “parents”, Kim & her husband, Kyle. He will soon be celebrating his 4th birthday on May 25th, so mark you calendars – he’s got blueberries, blueberries, and MORE blueberries on his birthday wish list!

Hi Kim! Where did you adopt Yoshi? How was your adoption process?

We got Yoshi from Jerry at Emerald Forest Bird Gardens. If you choose to get a toucan, I would highly recommend getting one from him. Not only was he so wonderful throughout our entire adoption process, he continues to be available for questions or when situations arise. He is “Mr2Can” for a reason – he knows his toucans better than anyone else out there. I would only consider getting a toucan from Jerry due to his very high reputation and reliability.

We picked Yoshi up from JFK airport at about 6 am, as he flew in from California on the red eye. He was totally jet-lagged and couldn’t keep his eyes open the entire ride home. It was so priceless! Once we got him home, he didn’t move for about 2 hours, then moved only an inch, and not again for some time. By the next day, he was right at home. I will never forget the first time I saw him at the airport – so cute! 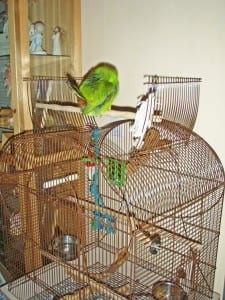 Have you owned any other birds prior to Yoshi? How would you say toucanets differ?

When I was younger, I owned a cockatiel. Toucans are much smarter and more interactive than cockatiels and create a much stronger bond too.

From what you can tell, how would you say the behaviors of toucanets differ from the larger toucan species?

In general, toucanets (from what I can tell) are just smaller versions of their bigger toucan cousins. I laugh when I see the Keel-Billed or the Swainson’s toucans do the same behaviors as Yoshi, but on a much bigger scale! The bigger toucans, as one would expect, have louder calls and sounds. But overall, from what I can gather, their behaviors are very similar.

Watch Yoshi play catch, just like our Three-Cans…although, I have to say it looks like he’d make a better batter 😉

What is a typical day in your life with Yoshi like?

Usually my husband and I wake up to the “mommy call” – Yoshi “clucking”, as we call it. Some owners refer to it as the toucanet’s morning song. As soon as Yoshi sees me, he stops and starts hopping about his cage, so happy to greet me. I get my bunch of kisses, then go off to cut-up some fresh fruit. Everyday, Yoshi gets fresh papaya, blueberries, and other in-season fruits. Depending on the time of year, his favorites are cherries, strawberries, and grapes. His most favorite fruit though are blueberries, which he gets daily – I can get him to do almost anything for a blueberry! He doesn’t like bananas at all, or apple so much either. Everyday he also gets Mazuri pellets in his food and in a separate cup inside his cage.

Depending on if it is a workday or weekend, Yoshi may or may not get to come out and play for the day. He loves to play by our fireplace with his toys and explore different places. He will fly to and from me or my husband, depending on his mood. The time of year dictates what time he goes to sleep. He usually falls asleep just after dusk, depending on the night. He usually “parks” first. That is what my husband and I call it – he picks a spot to sleep in (that too varies depending on the night), puts his tail up, and gets all quiet and fluffy. Before you know it, he is asleep. I love the summer months because he stays up really late and then we have more time to play after I get home from work. In the winter, sometimes he is already asleep by the time I get home. He will usually wake up once he hears me and my husband, but then goes back to sleep quickly.

Yoshi being his adorable self on the couch:

Have you trained Yoshi to do any special behaviors? Was it difficult?

Believe it or not, I had Yoshi completely potty-trained at one point. He would fly to his cage, poop, and then come back out. Unfortunately, I now have to re-train him. He had a “relapse” after we had to watch my mom’s parrot (he was too scared to come out of his cage) and lost his practice. Then we got a new couch and that totally threw him off! Anyone that has a pet toucan will tell you that they can be the biggest scaredy cats! He was afraid to come out of his cage for a week because of the new couch – coming out, but quickly flying back in. So funny. So, back to the potty training drawing board we go! It was pretty easy to train him though. Everytime he pooped, I just put him back in his cage. When he did poop in his cage, I would praise him and give him kisses. That was pretty much it. I hope it works again because having a trained bird certainly makes life easier! 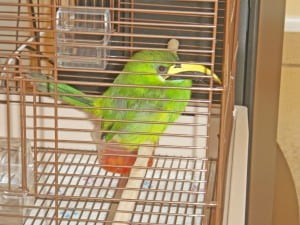 What is your favorite thing about having Yoshi in your life?

My husband and I don’t have children together so Yoshi is our “baby”. He is such a wonderful companion. He brings so much joy and laughter to both of us all of the time. Toucanets are just so quirky and funny – they always keep you laughing and guessing! My husband and I often say that Yoshi was one of the best decisions we ever made. 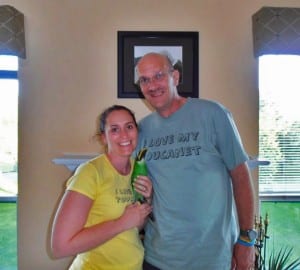 WE LOVE OUR TOUCANET!

What would you say is the most challenging thing about owning a toucanet?

Probably the biggest challenge we faced was the lack of information that was available during the time we were looking into getting Yoshi. You can’t just go to the pet store and get the “Toucan” book. Joining the Yahoo Toucan Group was a blessing! There are many experts in the group that have helped other group members in times of crisis or just to answer simple questions. The only other challenge that I can think of is the fact that toucans are quirky and you never know what they will react oddly towards. They definitely keep you guessing. I already told the story about the new couch, but we also experienced a similar reaction to our new vacuum. I also can’t tell you how many shirts that I have worn that Yoshi has obviously disapproved of! Other than that, they are truly the best pets ever!

Would you recommend toucanets as pets? What would you tell someone before they chose to adopt one?

I highly recommend toucanets as pets. We live in a condo and that was one reason we decided to go with a toucan. The toucanet was perfect because of their small size and the fact that they are not noisy. The other major difference is that toucans don’t have dander and down, so no tumbleweeds throughout the house. I would make one recommendation to anyone getting a toucan: get washable paint. They can be messy, although not any messier than a parrot. However, you will need to wash your walls free of papaya, blueberries, or any other fruit that finds its way there. We got Valspar low VOC paint (the super washable kind) and it all comes right off with no problem.

Also, a toucan does require time to cut up fresh fruit, which can be pricey too. However, it is worth the extra time to cut up fresh fruit in the morning, or you can even pre-cut a couple of days worth and keep it in the refrigerator. If you are looking for fun, companionship, and love but don’t want to walk a dog, get a toucanet! They are just as much fun and yes – Yoshi hops over to me like a dog when I call him. It is absolutely precious. Toucans rock! 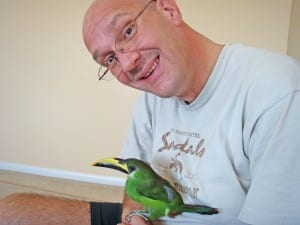 Big thank you to Kim and Kyle for sharing their adorable baby Yoshi with us! The Yoshi photos were all provided by Kim and the videos can be found on Yoshi’s New You Tube Channel – be sure to follow him to stay connected with the latest and greatest in his tiny toucan lifestyle.