The Three-Cans have been having a lot of fun exploring the new foraging ideas we have been coming up with for them. Every morning when we feed them their breakfast, we place their bowls and toys on the wall behind their aviaries as we walk around to put them inside. Anytime there is something new, they all eagerly hop back and forth trying to catch a glimpse, the anticipation of what’s new for the day making them crazy. 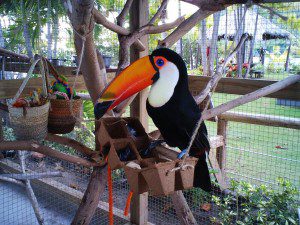 As you may have seen in our Toucan Foraging Beginnings, we started off with some basic foraging ideas to prime the Three-Cans. We quickly realized that a lot of the beginner ideas were extremely easy for them to overcome. So we have been working on some new ideas to continue raising the bar and keeping Paco, Paz, and Pepe on their toes. While it certainly requires much more time and creativity on our part, it has been really rewarding to know we are stimulating their minds and providing them with added entertainment in their aviaries. Here is what we have come up with so far, including lots of video with the Three-Cans offering their toucanlicious demonstration assistance.

These are what I call Pellet Perch Wraps – I took a strip of paper bag, filled it with some pellets, rolled it up, then tied it to a perch. I ripped a small hole in the top so the toucans could see what was inside and pick into the pellets. 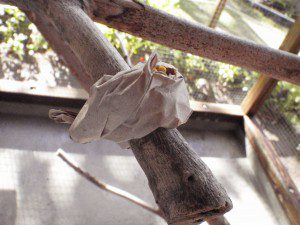 In this video, my lovely assistant, Paz, showcases the wraps and some pellet dumpling bags too:

For this next idea, we drilled some holes into colorful plastic bowls. By weaving twine through, we were able to hang them from various perches throughout their enclosures. We filled each bowl with a small amount of pellets, a couple of treats, then buried them under toys for the Three-Cans to dig through. 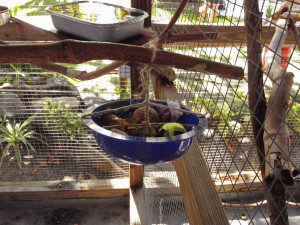 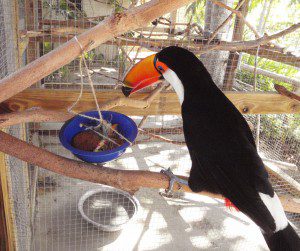 Another idea we had was to use trays of peat pots, similar to egg cartons, for hiding small amounts of pellets and treats. On top of the pellets, we placed small toys that had to be removed (and of course, played with) first. So far, this has definitely been the Three-Cans favorite foraging toy – not only does it come with fun toys, but the container is also destructible. 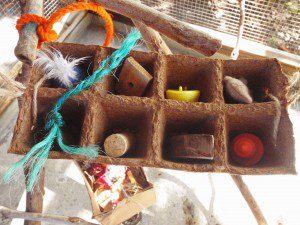 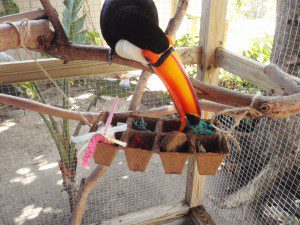 Watch the ever-adorable Pepe foraging in his tray:

For their fruit bowls, we have been experimenting with using lettuce in a variety of ways. Toucans, at least ours anyway, do not like to eat lettuce, but do enjoy ripping it up and throwing it about for mess-making merriment. I had the idea to make lettuce wraps with their fruit, but thought that may be a little too tough to start with. So we first introduced them to the idea by placing the lettuce underneath their fruit as a garnish, then the next day moved on to piling it in their bowls in layers, with fruit hidden between each layer. 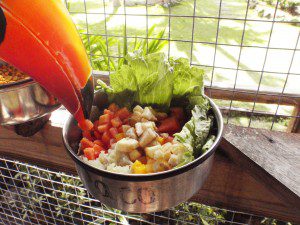 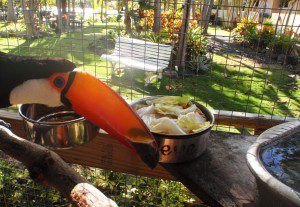 Here is Mr. Pepe again to show you his layered lettuce bowl creation:

The trickiest part we have discovered is creating a foraging opportunity that is challenging but not too inaccessible that it’s still intriguing. The other thing that is more difficult with toucans is the lack of dexterity in their beaks and feet in comparison to parrots. Some of the above ideas still require some tweaking on my part to make them more stable, which will allow the birds to actually eat more of the hidden pellets, rather than merely spilling them all over the ground. Always a work in progress here in Toucanland – these monkeys somehow manage to get more and more clever with each passing day…

2 thoughts on “Advancing to Level 2: Foraging for Toucans”