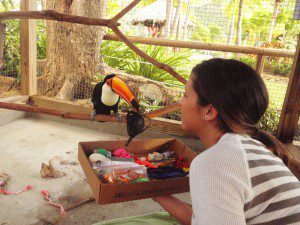 The Bag of Wonder is an enrichment game I created as a way to spend quality time and bond with our Three-Cans. You can find my  original post here. The game can be credited for numerous positive outcomes including: helping reinforce the “down” command; deepening the toucans’ trust in me; and creating a playful relationship between us. It is truly one of their favorite activities – the moment they spot me heading their way, asking if they want to play with me, they start bouncing around with anticipation, which never fails to make me grin with reciprocal enthusiasm. 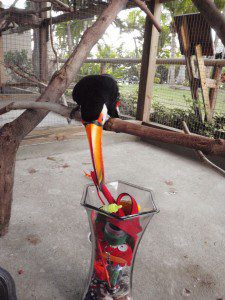 But, much to my distress, the Bag of Wonder has begun to lose some steam. While the birds never give up their faith in me, granting me the same wild greeting no matter what, there are definitely days that I come in and don’t have anything fresh and thrilling as they are hoping for. I was starting to notice that instead of the Bag inspiring a sense of wonder, it was becoming more of a letdown as they would impatiently sort through the bag, looking for something else they had not seen before. The most challenging thing about toucans, as I have mentioned before, is keeping them entertained. They are incredibly intelligent and playful, and therefore, grow bored rather quickly. No matter how captivated they are with a new toy, it’s still fleeting – their sharp, fickle minds soon searching for The Next Big Thing. 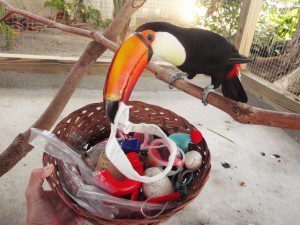 If I was able to have an endless stream of new, intriguing items to fill the Bag, this game could continue on as is for all eternity, each of us happy to continue the play with zest. However, living on a relatively remote island, I have infrequent opportunities to buy freshly wondrous things. I often find myself longing for a big Walgreens or Target nearby, as I am certain that I could surely find an array of toucan treasures to go the distance there. But alas, Target is no Island Mon, so it was back to the drawing board to find a way to reinvigorate the game or find another one altogether. 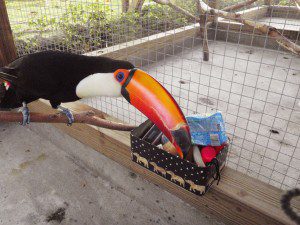 I first scoured the island, searching for items of potential interest that I may have missed. But I quickly realized that I had already shown them everything that was appropriate for them to touch. There were still things around that they would find interesting, but unfortunately, it wasn’t all safe. For example, I knew they would find some of my chunky necklaces appealing, but between the small metal parts and beads, they had Choking Hazard written all over them. But as the hamster wheel cranking things along in my brain sped up, I gleaned that I could still show the Three-Cans the small stuff, just as long as they were protected from direct contact. 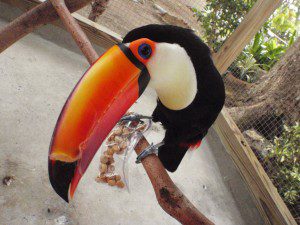 So I experimented with putting things into small Ziplock bags. It ended up working perfectly – they can still carry the items around in their beaks (a toucan fun requirement), but they can’t actually get to the item because their beaks aren’t capable of ripping as a parrot’s can. They now enjoy slapping the bags around and feeling the objects inside the wrapping, puzzling over why they can’t quite reach them. Things like cereal, necklaces, seashells, crayons, and marshmallows have been a big hit. Every now and then, when they’re holding a bag in their feet, their toe nails are capable of making small tears. But as I said in my original post, this is a supervised play only game. So if a bag begins to show signs of system collapse, I am able to simply take it away and replace it with a treat. 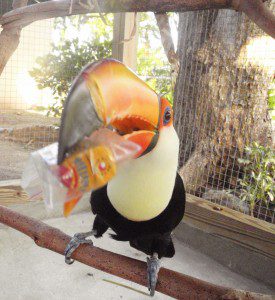 Next, I decided to change the vessel. The game may be called the Bag of Wonder, but the Bag, like its contents, was also growing stagnant and in need of a refresh. So I now replace the Bag each time with different types of containers: tin boxes, cardboard soda flats, trays, jars, jugs, clay pots, vases, baskets – you get the picture. For the most part, it has all been incredibly fascinating to the birds, excluding a few which ended up being alarming for reasons unbeknownst to me. As it turns out, small wicker wastebaskets are to toucans what ticking atomic bombs are to humans. Also interesting is the fact that items they have to dig out of containers and items that are laid out en masse in plain view are equally titillating. 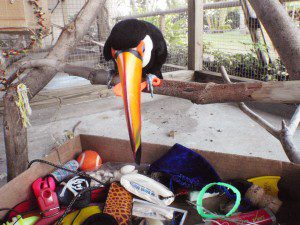 We’re still always searching for more, more, more to fill the bottomless Bag of Wonder. Anytime we happen to go out somewhere that there’s a store, I do my best to hunt down something engrossing to add to the game. But it’s difficult to ever know what will be alluring to them or not. Even after playing this game for our 6 months together thus far, I still make quite a few failed purchases, thinking they will love something only to bring it in and be snubbed. Like a sad, rejected romantic, I try and push it back on them, insisting – you’re missing out! This IS fun! – only to be rebuffed once more. 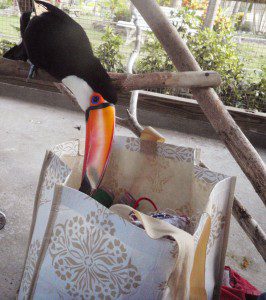 But try again (and again) I will. I refuse to let this beloved game slip away without a fight. The Bag of Wonder must evolve with the changing environment so it does not go by way of the dinosaurs.

1 thought on “The Evolving Bag of Wonder Game”