Toco toucans are not a sexually dimorphic species of bird. Or, to explain it in laybird’s terms, there is no visual difference between male and female toucans. Unlike many other varieties of bird such as ducks and peacocks, both genders of Toco toucans share the same coloring, general size, and indentifying characteristics. The best way to determine their sex is through an Avian Gender Test in which a blood sample is taken for DNA analysis.

I have also read of some general speculations of other ways to distinguish between the toucan sexes. According to the main Wikipedia page on toucans, “the bills of female toucans are generally shorter, deeper, and sometimes straighter, giving more of a ‘blocky’ impression compared to male bills”. Many other experts explain that it is a courtship ritual for the male toucan to give the female a piece of fruit, such as a grape, from his beak – the toucans will pass it back and forth until the female ultimately accepts and eats the treat. So the male is the giver and the female is the receiver…of treats. But all in all, there seem to be no conclusive studies (at least that I can find) to support these theories in the use of accurate gender determination. 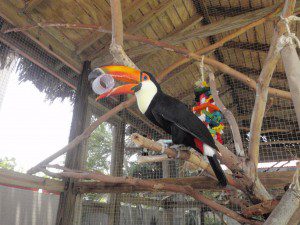 Gender aside – all the toucans LOVE their hair rollers!

Our toucans have never been sexed and the previous owners only provided what we now believe to be a willy-nilly guess as to who they thought was male and female. This information, however convoluted, is the reason we initially named the Three-Cans as two males and one female: Paco, Pepe, and Paz. But before we went ahead and bought His, His, and Hers towels, we decided to find out for certain. The birds recently had their first thorough vet examination since we adopted them and a blood test has been sent away for each of them to be officially sexed. There are so many things that we wish we knew about our toucans’ history, so to be able to solve this mystery is incredibly exciting for us and has everyone placing their bets.

After spending the last four months getting to know our toucans, we certainly have our feelings on who we think is male and female. Mostly though, that’s all it is – a feeling. It’s hard to really place our finger on it, but here are some of the more tangible reasons we could come up with to support our suppositions:

Reasons why we think Paco is a male: We feel almost 100% certain that Paco is all-boy. Paco is by far the largest and most magnificent-looking of the three, as male animals tend to be. Paco’s large head looks like he has an Afro-puff when he fluffs his feathers up – so much so that I can’t resist singing “He’s a Soul Man” whenever he does it. Other than that, he just seems like the Big Dog, Alpha Male of the Trio and it will be quite the shocking twist if we end up finding out that Paco is a girl. 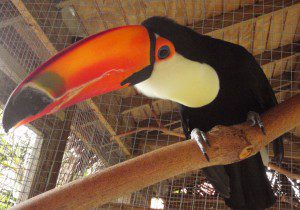 Reasons why we think Pepe is most likely female: If we would have only waited a week longer before we initially named the toucans, I think we would have probably decided to name Pepe as a female. Pepe is the smallest of the three and his top mandible is flat, unlike Paco and Paz’s curved beaks. Also, while Pepe will croak at the first sign of trouble, he is much less vocal with his purring than the other toucans. His purring noise is also slightly different in sound and more muffled in comparison. I think the only reason Pepe seems male to us is because we gave him a male name. There is a good chance that our little boy Pepe will soon be our little girl Pepita. 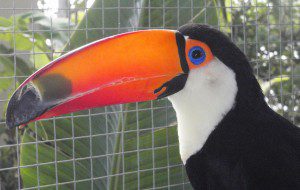 Is Pepe living incognito as a male?

Reasons why we think Paz is female, but could easily go either way: Paz consistently gives me treats, as she has bonded with me the most. Perhaps Paz can tell I am a female and has chosen to want to “mate” with me? Does this make Paz a male? But at the same time, Paz is the only one who ALWAYS notices whenever I change the color of my toenail polish and closely investigates the pedicure quality. Female? Paz is also much more vocal, almost chatty if you will, than the other two and craves the most attention. Female? There is also something different in Paz & Pepe’s personalities from Paco – does that make them both female? But Paz & Paco share more similar physical traits than they do with Pepe. Does that make them males? As you can see, Paz is definitely our biggest gender conundrum out of our Trio. 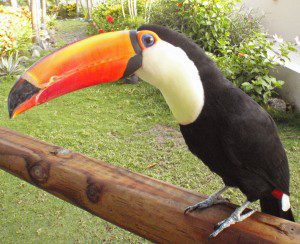 Reasons why they ALL could go either way: Whenever they get an exciting treat, they have all at various times tried to give it to each other from their beaks – there have been no definitive “givers” and “receivers” in that mating game. And the kicker: all three toucans’ favorite toy is a Velcro hair roller. And their favorite color is pink. Seriously, at this point, this is any man’s game.

We should hopefully have the results from the Gender Test within a week. In the meantime, your guess is as good as ours. I will go on the record here with my official prediction: Paco is male, Paz & Pepe are both females. Do you have a guess? If so, post on our Facebook wall and let the games begin!

3 thoughts on “Unlocking Our Toucan Gender Mysteries: Part I”