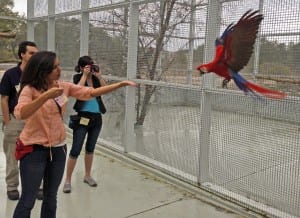 I recently had the good fortune to be able to attend the annual Behavior Apps: Training with Art and Science Workshop for companion parrot owners at the Natural Encounters training facility in Florida. The course is designed to introduce you to the science of behavior and provide you with practical techniques of how you can apply it in training with your own pet birds. It was an incredible week that I am really excited to share with you, as it has left me feeling so inspired and much better equipped in my “work” with the Three-Cans.

I originally found Natural Encounters through some bird training articles I had read online that were written by the President, Steve Martin. Duly impressed, I added them to my list of training resources and began following the company on Facebook. Last July, they posted that they were accepting applications for the workshop (only 24 spots available!) and I applied on a hopeful whim, asking if there was any way I could attend even though I do not own parrots. Thankfully, they were not species-ist and were willing to allow in a toucan interloper into their parrot group. I would only later learn that the methods they were teaching are not just for parrots, but are applicable to every animal in the world – including humans! 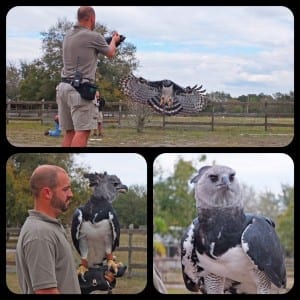 I didn’t know exactly what to expect going into the workshop. I had read through the synopsis online and it sounded fantastic (obviously, the reason I applied in the first place!) but I had no idea how it would be structured. The course summary stated that the workshop was “under the leadership of Steve Martin and Dr. Susan Friedman”, so I went in hoping that I would get a chance to meet them, but understood that that might not be possible. I’ve been to plenty of events in the past that were advertised as such, discovering later that that simply meant that the leaders approved of and helped design the material being presented. Overall, I was just hoping to get a few useful take aways from the week, perhaps even a bit of hands-on training time. 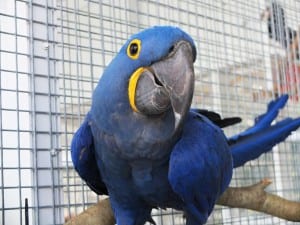 I am delighted to say that my expectations were blown out of the water and the workshop ended up delivering so much more than I could have even anticipated. For starters, not only were both Steve and Susan present from the beginning at the kick-off ice breaker event, they were with our group throughout the entire workshop – lecturing, giving training demonstrations, and answering any and all questions our over-eager minds were dying to ask them.

I won’t reinvent the wheel, as you can find thorough bios for Steve Martin here and Dr. Susan Friedman here. However, I will say that one could not ask for better teachers. They are the top minds in their related fields, yet are so easy going and down to earth. Both are entertaining, dynamic teachers who make it clear from the get-go that the most important thing to them is that you understand – that means they welcome any comments, feedback, differing opinions, and questions about things that may be unclear to you. They have a unique way of making subjects that once seemed complicated and highly specialized into easily understandable “no brainers” that you can excitedly see immediate application for in your own life. 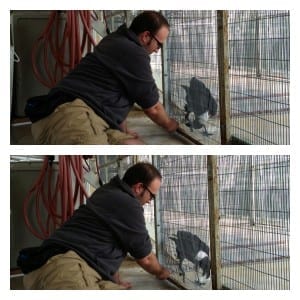 In line with the quality of leadership, the rest of the workshop was also a thoroughly organized, professional operation. The entire Natural Encounters team was committed to making sure we were getting the most out of our experience there. Virtually no time was wasted as they strived to make every moment count. Each day was separated into 4 hours of lecture time, 4 hours of hands-on training time with their birds, and applicable training reviews and demonstrations to help us anchor in what we had just learned. 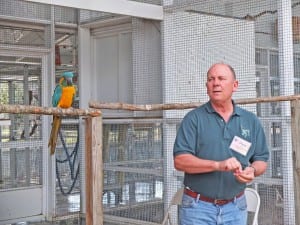 From a very young age, I have always had an interest in animal training and behavior. However, I often found myself at odds with a lot of the training styles popularly available, especially those focused on dominating the animal and removing its ability to think and make its own choices. This was definitely what I loved most about Natural Encounters. Their entire philosophy is based upon empowering the animal and they see unprecedented results through their positive reinforcement training techniques. At no point do they force themselves upon their birds, always respecting the birds by waiting to be invited into their space. They place a high level of importance on building up your relationship account with any animal you choose to work with and completely avoid the use of common bird training methods that create trust deficits such as holding feet, training on small perches, and other mainstream techniques which take away a bird’s freedom to choose to interact with you or not. 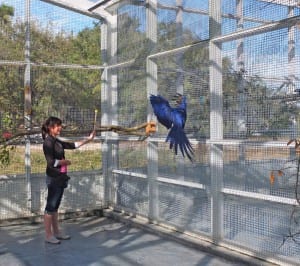 While I got my fair share of hands-on parrot training time (mostly with an adorable Scarlet macaw named Earth), Steve was also kind enough to pair me with a Trumpeter hornbill named Neo as my main “challenge bird”. Hornbills are much more similar to toucans than parrots are in their movements, high-energy demeanor, and appetite. In the times that I was not directly training with Neo, I gleaned a lot through observational learning, watching my teammates as they trained their assigned birds – Blue-throated macaws, a Hyacinth macaw, and even our other team bird, an incredibly intelligent White-collared raven. 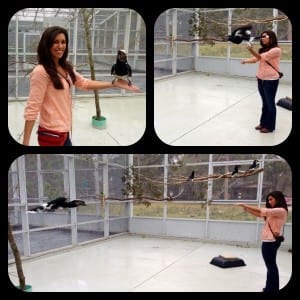 ~ training with Neo the Trumpeter hornbill

There were so many a-ha moments for me throughout the workshop but probably my biggest take-away would be what they refer to as antecedent arrangement, which essentially means setting your training environment up for success. A lot of the training roadblocks I have been experiencing back at home are largely due to me not setting myself (and the Three-Cans, for that matter) up to succeed by arranging a setting conducive to what I am attempting to train. Watching the professional trainers at Natural Encounters built my confidence back up. They weren’t performing magic; they were just highly in-tune with the training environment as it could be seen through their subject’s (the bird’s) perspective and always remained flexible to make adjustments as need be. Now that I am back home with the Cans, I have begun making small tweaks to our training environment and have already seen noticeable improvements in their levels of responsiveness. I look forward to sharing more details with you in future posts. 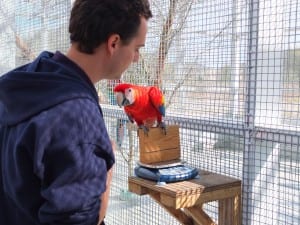 As if I wasn’t impressed enough with their conservation-minded operation, they also have an incredibly successful breeding program in place for the critically endangered Blue-throated macaws. They are to be releasing their first group back into the wild in Bolivia this year. 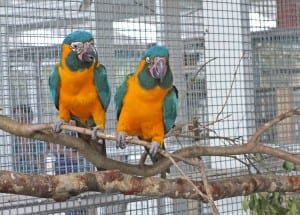 I highly recommend this workshop for anyone who has an interest in better understanding the animals in their life. It will make you see the world around you in a whole new light and offer an endless array of simple solutions to overcoming behavioral issues, great and small. Beyond the invaluable opportunity of learning from the best in the business, this workshop is also a fantastic value – I honestly can’t believe that they are able to offer it at the price they do; I felt like I should be paying more! Each day, they host breakfast, lunch, and happy hour (yes, happy hour !) at the training facility, as well as two group dinners. Your final evening, they host a celebration banquet at a beautiful historic restaurant nearby. They also take care of all of your transportation, including round trip from the airport. If you have the opportunity to attend one of their trainings, take it! 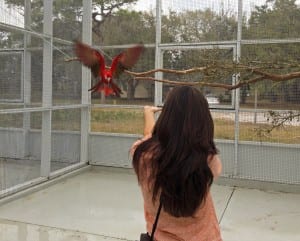 If you would like to see more pictures from my time at the workshop, I will be adding them to an album on Adventures in Toucanland’s Facebook page.