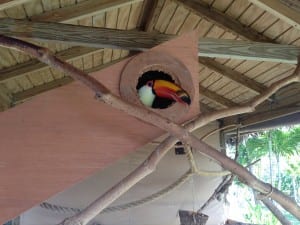 Prior to Pepe’s fall and subsequent “divorce” from Paz, we had just completed a newly designed nest box for the pair to use in this upcoming mating season. You may remember from my original post on Nest Logs for Toco Toucans that for our first mating season with the Cans this past year, we had opted to use the basic palm tree trunk design as specified in the Toucan Husbandry Manual by the AZA, also used by Emerald Forest Bird Gardens in California. However, we had had a few issues with it and approached the new season looking for a change.

For starters, our nest log was slightly smaller than the recommended dimensions due to our availability of palm tree trunks. While we were fortunate to even have one to begin with, we would have preferred something slightly larger. At the time, we had just cut down one of our big palms that had died so we used its thick base for the nest. Not wanting to chop down any bigger live trees, we settled for what we could get. 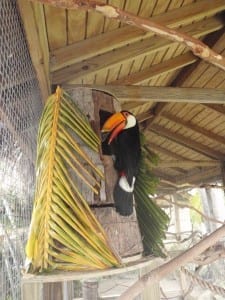 The other main issue we were looking to resolve was finding a way to provide the Cans with more space and easier access in the hopes that they would not lose as many eggs this time around. They lost every egg from all three clutches they laid last season (11 total) and while we did not have a camera in the nest to know for certain, we suspect they were breaking many, if not all, of the eggs as they clumsily entered and exited the nest. To get in, they would have to slide down, beak first. To exit, they would have to leap upward, cling to the door entrance, and pull themselves out through the hole. Both of these maneuvers, as well as all of the shuffling in between, could certainly have led to some broken eggs in the cramped quarters. 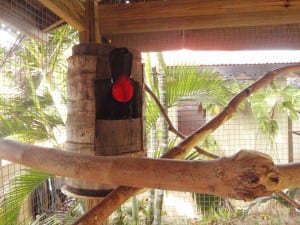 sliding into the nest

Lastly, we really wanted to create a back door that would allow us exterior access to the nest without alarming the pair by messing around near their main entrance. Between checking on the eggs and eventually needing to handle the babies should any hatch, this was an essential step that we had skipped in our first attempt and definitely regretted it down the line.

In my search for new nest options, I came across some photos in my fellow Toucan Lady Mairee Vincent’s Chasing Toucans album. While working at the Leed’s Castle Aviaries, they had developed a nest box radically different than the palm trunk log idea and had actually had fully-fledged toucan baby success with them. Plus, the nest boxes appeared to rectify all of the issues we had with our original nest log: 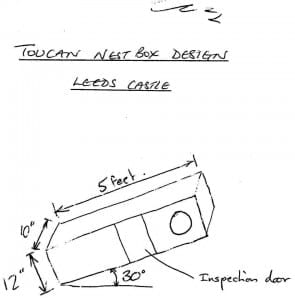 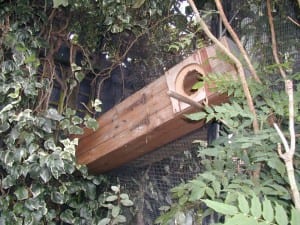 So with Mairee’s help in answering many of our questions, we had our new nest built based on their design. The main change we made was to make the base of the box,.the actual nest portion, into a flat surface rather than keeping it on an incline. We were concerned that if we left it on an incline, the Cans would have difficulty properly incubating the eggs, which could get stuck always resting in the corner. Mairee’s work had not experienced this issue due to their dilligence in constantly refilling the nesting materials. However, since we were starting from scratch and also remembering how insistent our pair was in removing every scrap of nesting material, we just decided to build the base flat, as they were accustomed to with their last nest. Additionally, we placed the access door in the back instead of the side and of course, our nest box was a little bit smaller due to the size of our aviary. 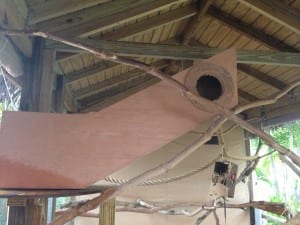 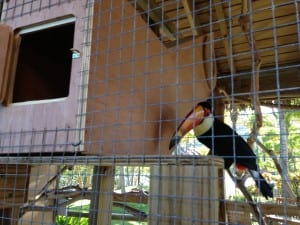 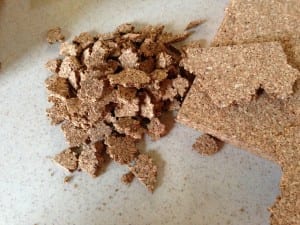 My favorite feature of the new nest was the idea from Mairee to initially cover the entrance hole with cork. Because Toco toucans tend to nest in hollowed out tree trunks in the wild, especially the soft, porous palm ones, it is a natural behavior of theirs to woodpecker their way in and excavate the nest to their liking. Paz had a great time focusing on the task of pecking her way into the nest. 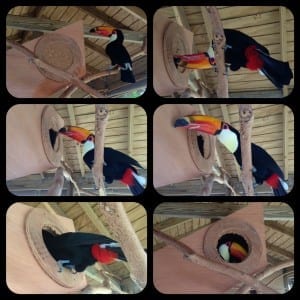 Paz works her way into the nest

At this point though, we have sadly had to remove the nest box from Paz’s enclosure. The presence of it was inspiring an array of unnecessary nesting behaviors that we needed to stop for her mental and physical well-being. We didn’t want to encourage her obsessive mating behaviors now that Pepe was not to be returning and she would be living without a mate. It was important to prevent the potential stress on her body that would eventually come if she were to lay unfertilized eggs. So as awesome as the new nest box is, unfortunately, it is no longer something we are able to use. Bad timing, c’est la vie!

We will never know if this nest design would have worked for us or not. But, in the spirit of sharing, I just wanted to put the information out there for anyone in need of a new toucan nest design idea.