Prior to adopting the Three-Cans, I was completely unaware of the whole wing clipping debate that exists in the bird world. It is a subject that produces passionate, heated exchanges comparable to human world hot topics such as gay marriage, abortion, and Angelina Jolie vs. Jennifer Aniston. Bird owners everywhere can be either staunchly against wing clipping, fighting to promote a free-flighted world, or on the flip side, fervently wish to reserve their right to wing-clip without judgement and consider it a private issue. While conflict-avoiders such as myself may wish to be publicly impartial, this is a difficult matter to remain Switzerland on – you’re forced to make a choice and find it near impossible to keep your decision under wraps. 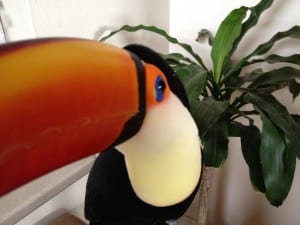 For those of you still blissfully unaware, wing clipping is when you trim some or all of a bird’s primary flight feathers so that it is no longer fully-flighted (read: equipped to fly at full capacity). Wing clipping, not to be confused with pinioning, is a painless (like cutting hair), temporary measure – clipped wings will only last until the bird’s next molt. People generally clip their bird’s wings for the main goal of reducing its ability to fly – the idea being that if it accidentally escaped outdoors, it wouldn’t be able to fly away. Without their flight feathers, birds are no longer able to get lift – the wind resistance in their wings is necessary to fly upwards. However, contrary to popular belief, most birds can still fly, if only slightly straight and/or downward, with clipped wings.

Having the Three-Cans, the question of if their wings are clipped or not comes up frequently. And while I have always tried to answer as simply, factually, and indifferently as possible, I figured it was time to give a bit more detail about my experience with wing clipping in toucans. The purpose of this blog is to share what I learn so that others may learn from my learnings. However, as I enter the bloody waters of this age-old wing clipping debate, I would just like to note that this is simply my experience and nothing else. I am not an expert and will not argue with you regarding the choices you make with your bird. If you have a toucan and would like my advice, you can always ask for it. But until then, consider this merely a journal of my life with my Three-Cans. Please do not throw stones. I come in peace. 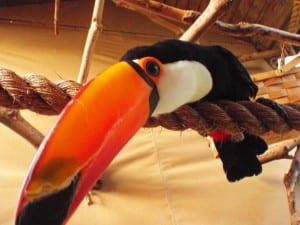 Having had no experience in the wing clipping department, I was caught a bit off-guard and consequentially, overwhelmed by the decision of it all. On both sides there were valid reasons to be had, as well as logical evidence to support each position against the opposing team. There are trusted experts in both camps, credible You Tube videos from all those campaigning. Ultimately, we did what we could with the information available to us. We weighed the pros and cons relative to our specific situation and flock. In the end, we made the decision to have the Three-Can’s wings clipped as we brought them home. 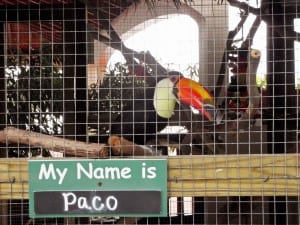 Our main reason for clipping their wings (or, more accurately, having their vets clip their wings) when we first adopted them was mostly because we had just moved them to an entirely unfamiliar island and felt that until they were acclimated/bonded to this new home, it would be dangerous should they ever get loose and fly away. As this is not their natural habitat and there is nothing here in the wild to support them. Should they fly away, they would likely die of starvation (or worse) quickly. We felt that because our aviaries do not have a “catch” built onto them that the wing clipping would protect against their ability to fly out of their aviaries with too much ease. Their wings were already clipped when we adopted them and had been for years, from what little I know about their past. We figured we would just maintain what they were already used to as they adjusted to their new home and in turn, give ourselves time to get to know them before it was time to reassess the situation again come their next molt. 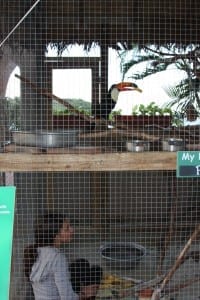 There are many aspects to the wing clipping debate. I’ll let you search them out yourself if it is an issue that is of particular interest to you. What I would like to share are a few of the things that we witnessed with our three Toco toucans, who, being the unique individuals that they are, all had much different experiences with wing clipping.

From the get-go, Paz was always our most timid toucan. She kept mostly to herself and shied away from interactions with us. Due to her personality, I assume that no one ever really handled her much before. On a few instances, she found herself closer to me than she anticipated and, caught off-guard, reacted aggressively out of fear. Some of my most painful pecks have come from Paz. I have had to move the most slowly with her in our training to respect her boundaries. While she did eventually become accustomed to us, she always seemed to have a protective wall up when interacting with us – a wall I assumed would probably always exist due to her unknown past. 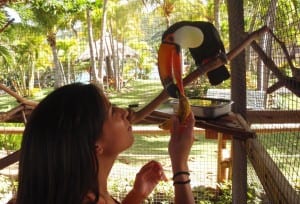 However, more recently, I am elated to report that that wall has finally come down. While she is still not as comfortably social as the two boys, she now looks forward to interacting with us and engages in ways she never did before. She chooses to be close to me, free of nervous, untrusting energy. I attribute this almost completely to her flight feathers being allowed to fill out. I believe that her previous insecurities were mainly due to the fact that she felt she was not able to escape quickly with her clipped wings. Many birds who are clipped suffer from a lack of confidence and exhibit fearful behaviors because of their limited mobility. Now that Paz feels assured in her ability to fly away from us if she becomes uncomfortable, she actually chooses to be near and has learned to trust. We now enjoy a much richer relationship, one that I had previously thought might not be possible with her.

Pepe is the toucan whom I regret clipping his wings the most. When we first adopted Pepe, he was always the bird I was most concerned about, health-wise. He was very uncoordinated and would often miss the perches he intended to hop onto, sometimes even scaring us with his falls. Pepe also had a significant issue with eye-to-foot coordination. He would attempt to pass toys from his beak to his feet but could not seem to make the connection with his feet. But after a few months with us, Pepe’s health noticeably perked up. He was really captivated with his enrichment (something he had not experienced before, from what I know) and he soon regained the ability to coordinate his feet. 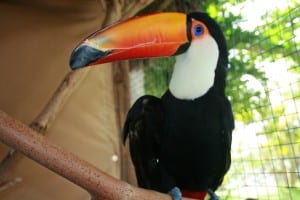 However, Pepe still has a balance issue. While he is in overall good health, I suspect there is something off with his inner ear, where his center of balance lies. This is something we are not able to correct, but instead, need to do everything we can to compensate for it and improve his mobility where we can. While clipped wings were not the root of his problem, they absolutely did not help and did hurt his mobility unnecessarily. Now that he is fully-flighted, he still has some random falls, but his balance has improved and he is able to save himself from falling more often than not through a quick flap of his wings.

Paco is my little ninja. He is incredibly strong and agile with the reflexes of a super tricky cat. From what I could tell, clipped wings did not make a significant difference in his lifestyle. He has never fallen down and has always been able to fly short distances with his clipped wings. He has never suffered from the confidence issues of Paz or the mobility problems of Pepe. Due to his abundant energy, clipped wings actually were quite useful in my initial taming and training with Paco. Because of his level of fitness, he was still able to moderately fly with his clipped wings and that allowed us to build on my flight training with him slowly and focus his often uncontainable enthusiasm. 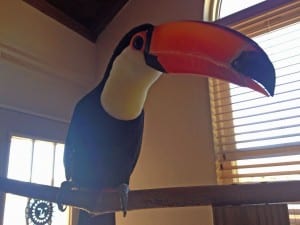 However, I would just like to note that I think Paco is an extremely rare case. Most birds with clipped wings take a lot of training to help them re-learn how to fly, some never taking to it with gusto ever again after clipped wings. Paco is unique in his confidence (bordering on arrogance), his strength, and his ability to rebound quickly from setbacks great and small.

Now that Paco is fully-flighted, working with him on his flight training is immensely rewarding. It is spectacular to watch him fly around the house, negotiating turns, and heading to me for a landing. No matter how strong he may be, clipped wings stole quite a bit of his thunder and I can see now just how much. True – it is more difficult on me to have this bundle of crazy toucan energy fully-flighted and exploring the house like a wild monkey with wings. But the exercise and joy it brings to him is something incredible to witness and something I never plan to take away from my boy again. 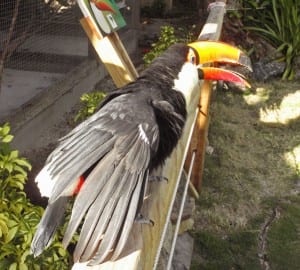 All in all, I have my regrets on clipping the Three-Can’s wings. Through their molt, I have felt many pangs of guilt whenever I find the molted clipped feathers, ugly in their short, snipped-off appearance. Ugly in the sense that they remind me of Pepe’s falls; remind me of Paz’s mistrust; remind me of what I stole from Paco. But as much as I wish I could go back in time and take it all back, I cannot. We must all do what we can to provide the best life in our power for the birds in our care with the information we have available to us. With time, you receive more information and it is then that you learn and adapt. For me, wing clipping with toucans was a mistake in judgement – one I have learned from and don’t intend to repeat.

4 thoughts on “My Experience with Wing Clipping in Toucans”