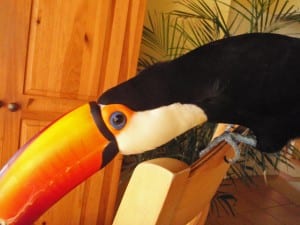 Finally having Paco acclimated to the inside of our house is a HUGE step for us. I realize that it may seem strange that it has taken almost a year for us to get to this place and that it’s actually a bit backwards from what most people do. Most people adopt their bird and house it inside their living space, then (hopefully) eventually introduce their bird to time outdoors too. But for us, the space requirements for Toco toucans in addition to the fact that we live in a tropical climate similar to their natural habitat, made our decision a no-brainer to house the Three-Cans outside from the moment we brought them home. Also, from what little I know about their history, I don’t think they have ever spent much time, if any, indoors anyway. 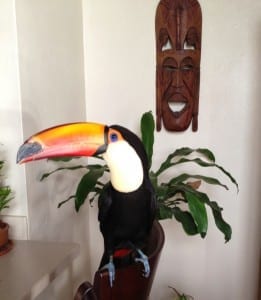 While they are content with their living arrangements outdoors, it has always been my goal to also have the ability to bring Paco inside with me. He has become so attached to me and I know he would gladly spend 24 hours a day by my side if given the chance. The current arrangement of me only being able to spend time with him outdoors in his aviary has been challenging at times due to the fact that I want to give him as much attention as possible, but me spending hours each day in his aviary gets tough on my human schedule.

Paco has always been incredibly fearful of the indoors. The first time he came in, I think it scared me almost as much as him. He freaked out so much, I was worried he was going to have a heart attack or pass out from the shock of it all. In hindsight, I suppose that was a bit of a dramatic concern of mine, but rather than wait to find out if my unease would be proven true, I decided to allow our relationship time to develop before we moved on to overcoming this major fear of his. Over the coming months, our bond grew deeper and I knew I was ready to try adapting him to the indoors once more. The final step in the process was getting him trained in his backpack, which was necessary for safe transportation to and from the house. Once we checked that one off of the list, all systems were go for Paco’s second foray into The Great Indoors. 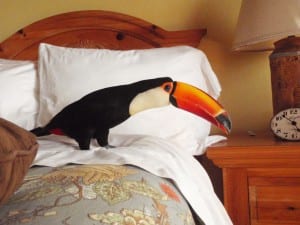 To set Paco up for success, I first toucan-proofed the house by putting away anything potentially dangerous for him (ie. anything small enough to be swallowed), drew the shades partially closed to avoid window collisions, and turned off all fans. We also wanted to make sure he would have something familiar to make him feel at ease, so we built him a stand with the same almond tree perches as his outdoor areas on it to use as his “home base”. I set-up a chair near the perch tree to place his backpack on, that way he would have the ability to go in and out of it as he pleased. Also, while he’s in the house, I decided I would place his food bowls inside of the backpack to encourage him to use that as his own safe spot and to keep reinforcing the positive associations he already has with the backpack. 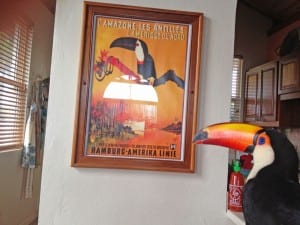 The first couple of times Paco came in the house, he pretty much stayed glued to his perch tree. While I was eager for him to begin moving about and exploring, I was glad to see that he was content with the stand as his base and didn’t feel the need to leave it due to feeling uncomfortable. Though soon enough, his curiosity and desire to interact with me began to outweigh his fears. Anytime something would catch his eye and I could tell he wanted to take a closer look (the mirror was first), I would offer my arm and allow him to investigate the new items from the relative safety of being attached to me, turning to give him room to fly back to his perch tree whenever he seemed to have had enough. I also used this opportunity to introduce him to the windows by pulling aside the blinds and touching his beak to the glass. My hope is that after some repetition with this, he will begin to understand that it is solid and not something he can fly through. 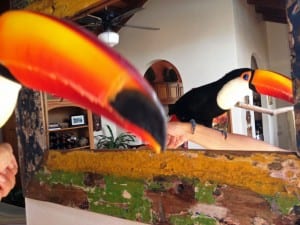 Just the simple act of exploring this whole new intimidating world with me is important for Paco. Because I am the only thing he feels comfortable with in this unfamiliar space, his bond with me has deepened as he is continually affirmed in his vision of me as a consistently safe (and fun!) presence in his life. When I walk him around the house to explore new rooms, his trust in me continues to grow which will also prove to be crucial when I begin to eventually traverse more spaces outdoors with him too. 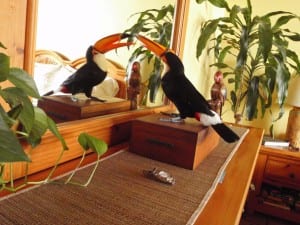 One of the most exciting elements of Paco being indoors is our new opportunity for flight training. I have never been able to work on flight skills with him yet because his aviary is not sizable enough for any distance and when he comes outside, he is easily distracted and I just try to keep things safe and under control, rather than pushing him outside his comfort zone. While Paco will always willingly hop onto my arm, I have noticed that he does not feel safe flying onto it. My guess is that it is not as steady of a surface and he is nervous about a crash landing if he slips off my arm. My suspicions were proven correct the first couple of times that something spooked him and he made a panicked flight around the house and chose to land on either the floor or cling to the window blinds rather than attempt a landing on my proffered arm. 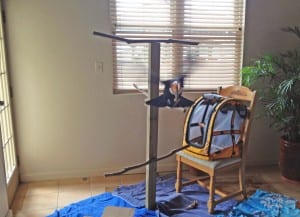 So I immediately decided on that as my first flight skill to hone in on with Paco, as I feel it is certainly the most important. In order for him to eventually spend more time outside, it is imperative that he feel comfortable flying to me, should I not be close enough to hop onto. Thankfully, this ended up being a simple enough skill to teach, mostly due to Paco’s strong motivation to be near me. Currently, as a result of heightened mating season hormones, he becomes insistent throughout the day to feed me;  I used these situations as incentive to fly. Every time he would begin purring with some treat in his mouth to bestow upon me, rather than go to him, I would offer my arm just beyond the distance where he would be able to hop. The first couple of times, his landing was understandably shaky and I would need to assist with my other hand to keep him from slipping off. But after a few more very short flights, he got the hang of landing on me and his confidence increased as I gradually extended the flight distance between me and his perch tree.

Watch Paco fly to me:

The other necessary flight skill I have been working on is teaching Paco the things in the house that are ideal to land on and the things that are not. This will give him more freedom to move about as he desires, rather than feeling the need to always be transported by my arm. At the moment, he is hesitant to fly to anything besides me, as he doesn’t seem to recognize anything perch-like. So I have started introducing chair backs to him as a perch alternative. He has yet to fly to them of his own volition, but he did make a landing on one after a short, panicked flight, whereas before, he would have simply landed on the floor. So we’re making progress there. 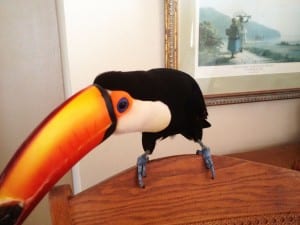 It’s still all so new to us, but with each time Paco comes in, the more comfortable he becomes. I am always left with a high after times when he is indoors due to the connection between us that has been forged and fresh breakthroughs to celebrate. It is obvious how much he enjoys it too, as he is perpetually eager to hop in his backpack whenever I go to pick him up from his aviary for some quality time. 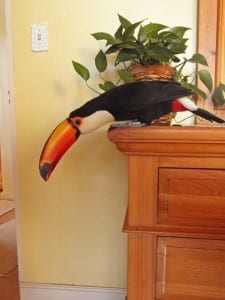