I hesitate to confess how completely and utterly shocked I was to find eggs in Paz and Pepe’s nest. After all, I had just socialized, then housed together two healthy birds of breeding age expressly because they had been extremely interested in each other and exhibiting courtship behaviors through their shared wall. So theoretically, why wouldn’t they breed? But in my defense, I had always heard how notoriously difficult it was to breed Toco toucans and that one of their major requirements for successful breeding was seclusion, something we are unable to provide. Our goal with joining Paz and Pepe has always been simply for their happiness, rather than procreation. We figured the chances of them mating and producing young were slim to none and we had no qualms with that. But mate they did and within a mere 3 weeks since their first meeting, we discovered 4 eggs in their nest on March 31st. 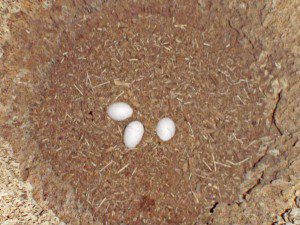 It had been an otherwise normal morning except that Paz was spending the majority of her time inside the nest, choosing not to participate in our AM training session or the succeeding cleaning time which she usually enjoys, mostly due to the many opportunities for treats. Worried that there might be something wrong, I decided to have a peek inside the nest once she finally emerged to eat her breakfast. And there they were – 4 white eggs, each slightly smaller than a chicken’s egg, huddled together in the nest.

Toco toucans lay clutches of 2-4 eggs in an unlined nest cavity. Incubation is roughly 16-18 days, the responsibility shared by both the male and female. Once hatched, toucan chicks will remain in the nest for up to 7 weeks, until they are eating on their own and fully fledged. 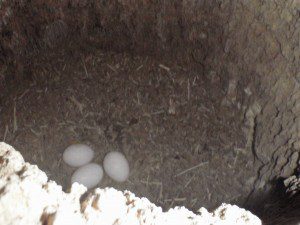 We decided to keep the eggs a secret to ourselves, as there is so much that can go wrong and we didn’t want to get anyone’s hopes up, including our own. I was also not that keen on adding to the pressure by being interrogated daily on the success, or lack thereof, with the current clutch. As I have mentioned before, it has never been our intention to breed the toucans. Heck – we didn’t even know their genders when we adopted them! Our focus has always been to simply provide them with the best life possible. That being said, it would certainly be exciting to experience the raising of toucan chicks. 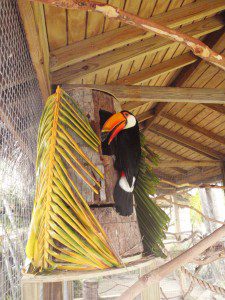 But David and I are both in agreement that Paz and Pepe’s happiness comes first and barring a case of total abandonment, we will not remove their eggs/babies and will leave them to rear their young. It is a personal choice, we do not judge anyone who makes a different decision, this is just what is right for us. We see it as our responsibility to provide the parents with everything they need to have the best chance possible at raising healthy chicks.

Being struck by surprise with this early clutch and feeling ill-prepared, we immediately set to work consulting breeders and our veterinarians on nutrition and other considerations, ordering in all of the supplies we would need to assist the parents. Toucan chicks are highly susceptible to Candida, a type of yeast infection, and require daily doses of medication as a preventative for early death. The prescription, along with hand-feeding formula and syringes in the event that the parents abandoned their babies, were all rapidly FedEx-ed to our little island in preparation. 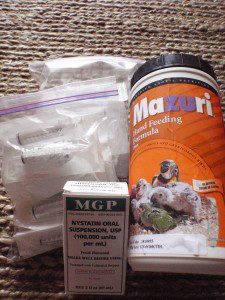 With Toco toucans, both the male and female will incubate the eggs. In our case, Pepe’s level of involvement seemed to vary. The first week, they split the task pretty evenly with Paz taking the late afternoon and overnight shift and Pepe spending most of the daytime incubating. The second week, for reasons unknown, Paz took over the full brunt of the incubating responsibility, with Pepe covering only for the brief stints when she would leave the nest to eat and drink. 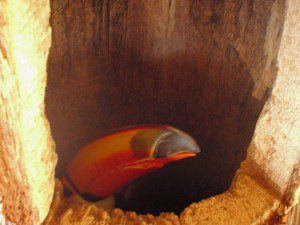 The first egg to disappear came shortly after our initial discovery of the clutch. We later found egg shells in their droppings, confirming the fact that they had eaten it. The three eggs survived for another week until Pepe destroyed two of them successively on April 5th and 6th by breaking a hole in the egg, eating its contents, and dumping the shell on the aviary floor. There is no way to know the definitive reasons why they would consume their eggs. According to Jerry Jennings of Emerald Forest Bird Gardens, “Toucans, including Tocos, frequently eat their eggs or young in the wild and I have seen videos taken by nest cameras in wild Toco nests in Brazil, wherein the parents eat an egg or a baby. They may eat just one and carry on with the remainder, or eat all three. There is no good explanation other than perhaps the nest was suffering some sort of disturbance that was not recorded or observed.” Because we do not have a camera inside our nest, we can only guess that perhaps they could tell that the eggs were infertile, or perhaps they accidentally cracked one by stepping on it, or there could be many other undetectable reasons for eating the eggs. But from April 6th onward, they continued their commitment to their last remaining egg. 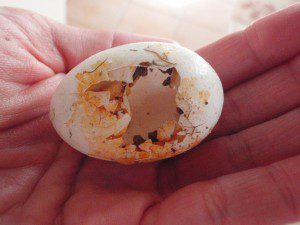 one of the eggs Pepe ate

While it is impossible to accurately gauge an exact timeline when the parents are incubating the eggs themselves, the remaining egg seemed to last well beyond the specified incubation time. When I peered into the nest on April 22nd, I noticed the egg had a small smashed spot, looking to me more like something inflicted by Paz or Pepe, rather than a normal hatching. At this point, Paz appeared to have given up on the egg, spending her day outside the nest. Pepe, however, was reluctant to give up on it. He turned the smashed spot down onto the nest bottom and continued to incubate. Yet by the following morning, both Paz and Pepe had seemed to have released responsibility for the egg. While I wanted to help by removing it for them, I was advised to leave it be, told that they would take care of it when they were ready. Sure enough, when I came out mid-morning to check on them, there were no traces of the egg left in the nest but there were bits of shell on the aviary floor and Paz’s beak by way of explanation. 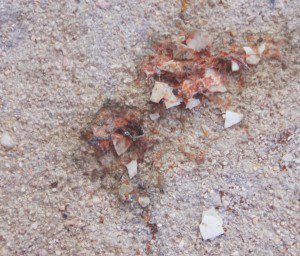 Paz seemed a bit downtrodden through the next day, preferring to sit stoically on her own up high and not desiring any treats or interaction. But life goes on and two days later, she and Pepe were back to their courtship dance of purring and sharing treats, mating again, ready to throw their hand back in the game. By the looks of it, I am certain we will have more egg stories to come and you never know – one of them just might lead to a baby-can. 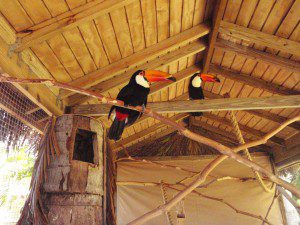 I would like to thank Jerry Jennings, Rebecca Taylor, and our trusted veterinarians Dr. Laura Palminteri and Dr. Heidi Stout for the generous sharing of their time, support, and valuable knowledge. We are so appreciative and feel lucky not to have to figure it all out on our own!

3 thoughts on “Our First Egg Adventure”