As an enrichment activity, I will sometimes bring in my iPad for a bit of toucan playtime. People definitely have a good chuckle if they happen to walk up as I am showing the Three-Cans the iPad, incredulously asking me what the heck I am doing. This, of course, earns me a few more checks in the Crazy Bird Lady column, but when you’re wearing a toucan shirt and cooing at your toucans in public, it’s just a hazard of the game that I am willing to accept. I originally discovered their interest in the tablet when I decided to relax in Paco’s aviary with him and read a digital magazine. Paco was both startled and enthralled with the bright colors and movement, purring away over my shoulder, eager to see what was next with each page turn.

I mostly show them pictures, which seem to be their favorite and the least disturbing for them to look at. They enjoy a variety of colorful images, although the ones of themselves and other birds are definitely the most interesting to them. I have tried to show them You Tube videos with other birds in them but unfortunately, the sounds of the other unidentifiable birds tend to set them all off in a croaking panic. So for now, I refrain from the random birdie vids and just stick with the pictures, or solely videos of toucans who make noises they are familiar with.

Like a doting parent, I am constantly amazed by the wonder that is my Three-Cans. I was quite surprised to notice some of their reactions to certain images which has given me further insight into their visual capabilities, which I know very little about. I am always curious about how they see the world and I find their ability to see the details of the iPad pictures pretty incredible, especially when you consider other animals, such as my cat, who has zero interest in it unless it is displaying flashing, fast-moving pieces.

When Paco saw this picture below, which was taken inside their aviary, he immediately tilted his eyes towards the roof. I thought this was pretty amazing for him to make the connection between the roof in the picture to the real life version he lives under: 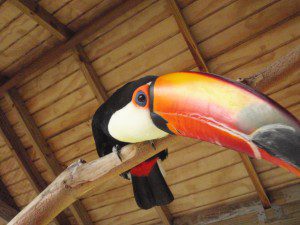 All of the birds enjoy looking at pictures of each other. The funny thing I have noticed is that they will look at images of their other two flock members with similar, mellow interest, but when a picture of themselves pops up, they are always much more animatedly intrigued, as though it is someone they do not recognize. Obviously, this makes sense since that they do not have the ability to understand what they look like as an individual, but I find it most interesting that they can so easily identify each other in a picture. They also seem to be able to recognize both David and me in pictures. When I show Paco the picture below, he actually seems to get angry, perhaps jealous, wondering who the other bird is in the picture with his main squeeze: 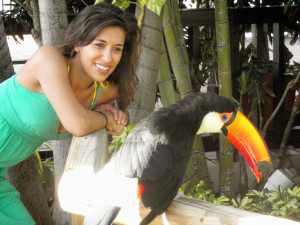 They also seem to be able to read each other’s body language in the pictures. How they respond to an image is mirrored by the mood conveyed by the picture toucan. I showed Paz this picture, in which Paco is startled, and she immediately pulled back, also seemingly afraid of what he was afraid of.

I am sure that someone with a much more scientific mind than mine could put together a very interesting study on this subject. Perhaps they already have and I simply cannot find it. But for now, that’s my newest observation on the ever-mysterious Toco toucan. It’s anyone’s guess what they will impress me with next.