In designing the Toco toucan, there were no corners cut, no expense spared. Every new detail I discover about these amazing creatures leaves me in awe of the wonder that is nature. Their mouth and tongue are no exception.

People watching the toucans will often remark, “What is that in his mouth? It looks so weird!”. You guessed it, Bob – that would be the tongue. 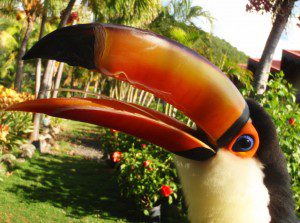 The toucan tongue is long, almost the full stretch of their roughly 7 inch long beak. The main length of the tongue is thin, grey-white in color, and frayed along the edges, almost having the appearance of a feathered fishing line (I do realize that feathered fishing line does not exist, but if it did – this is exactly what it would look like!). The base of their tongue resembles more of a traditional tongue – thicker, pink, and moist with saliva. And the icing on this stunning cake? The back of their throat is blue. 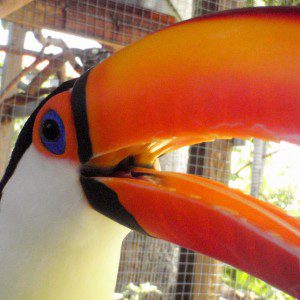 A big purpose of their tongue seems to be to help them throw food back down their throat, as fruit will sometimes get stuck on the roof of their beak (darn mushy banana!), which seems to explain the length of their tongue. Since the toucans do not have any teeth, if they get a piece of fruit that is too big to swallow, they will throw it up in the air several times, mashing it between their beak each time they catch it. If they attempt to swallow something that is too large, it will stop in the back of their throat and get thrown back out to be squashed in their beak before attempting to swallow again. 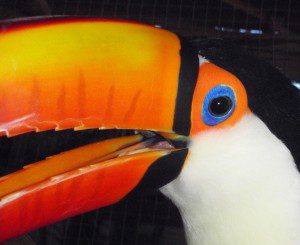 While it doesn’t look like there would be many taste receptors on that feathery strip of a tongue, there certainly seems to be. The toucans appear to know immediately upon putting an object into their beak if they want to eat it or not. I have tested this with a variety of fruits cut in different ways to see which ones I can use for training treats. They first rely on sight. Then, once it’s in their mouth, if they do not like the taste (I’m assuming), it’s spit right back out. This often happens when they’re reaching for a papaya chunk and end up with cantaloupe instead. Visually they’re the same color, but they much prefer the tropical punch of their adored papaya. 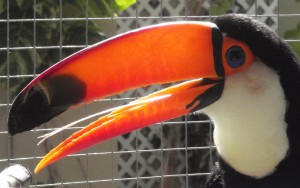 I’m starting to think toucans are closer related to dogs than commonly thought. Often, when they’re playing with a toy, they will hang their tongue out one side of their beak as though it is in the way. Another surprising factoid to support this theory: toucans drool! Not all the time – we’re not talking about Hooch-levels here – but occasionally, there is a bit of dribble. It always seems to happen when Paz has the tip of my finger in her mouth and is tapping it between her beak. This is a comfort behavior of hers and she will sometimes do it for at least 5 minutes straight – and that is precisely when the trickle of drool starts to drip from the side of her beak. I know what you’re thinking, but I assure you you’re wrong. It is incredibly adorable and completely un-gross. 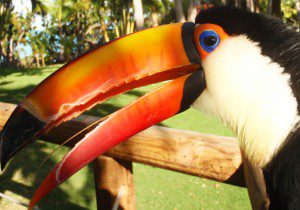 So there you have it – your newest conversational gem. The next time there’s a lull, feel free to open with, ” So, did you know toucans drool?” You can thank me later. 😉

3 thoughts on “The Toucan Tongue”