When we adopted our “three-cans”, I tried to get as much information out of the previous owners as possible regarding the birds’ history, care, and personalities. They didn’t have much to offer and what little information I was provided has now proven to be incorrect. I think they had them mixed up which sadly proves how little attention they must have paid the birds to confuse them so easily. To us, they are all so different in personality and easy to tell apart visually at a quick glance. 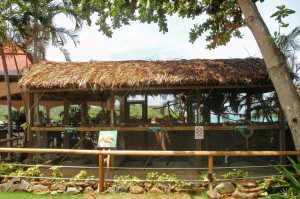 When originally selecting which toucan would go in which cage, our main goal was to find out if any of them had a problem with one another and who was the most skittish bird. We wanted to separate any that did not care for each other and put the most timid toucan in the cage with the most seclusion, which is the one closest to our big almond tree and furthest from the main walkway. We were told they all got along fine side by side in cages and that Pepe was the most nervous in personality. So with this advice, we placed Paco in the most open cage closest to the walkway, Paz in the middle, and Pepe on the farthest end with the most protection. Unfortunately, all of this was wrong so we decided to rectify the situation as soon as we could.

Since their arrival 3 months ago, we have never had all three of them out of their enclosures at the same time. Because they spent this past Monday night in their carriers (see: Toucan Slumber Party), we decided to use this opportunity to switch the birds into different cages. For one, we think it is good enrichment for them to have a new view and new perches from time to time to keep their living situation fresh. The other main reason we wanted to switch them up was to separate Pepe and Paz. The two of them “beak-fence” between their cages at sunrise, sunset, and other random moments throughout the day. While this is somewhat normal behavior for toucan interactions, it is not good for their beaks and we wish to avoid any damage further than what has already been done in their past.

Paco and Paz have already shared a wall and do not show each other much attention, so I knew if we put Paco in the middle, we wouldn’t have any problems on the Paz side. Paco’s relationship with Pepe was a wild card, but we figured we would roll the dice for now and make any necessary changes later should it not work out positively.

When we put the toucans back into their enclosures on Tuesday morning, we placed Pepe in the most open cage closest to the walkway, Paco in the middle, and Paz on the opposite end. They didn’t seem stressed or upset by the change, as they were mostly just ecstatic to be out of their carriers! They spent the day enjoying the views and exploring their new perch arrangements. I was happy to see that they settled in so quickly and seem to love their new homes. 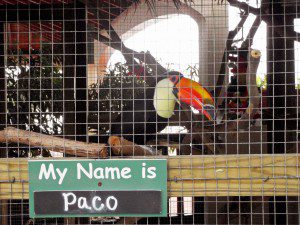 Paco is the most skittish of the three toucans. When he was in the most exposed cage, he was constantly hopping around up high, always on the look-out for “danger”. While he still spends a good portion of his time as the flock’s watch dog, he finds more time to relax and socialize now that he is the monkey in the middle.

Pepe is loving life in the spotlight. It is a relief that he doesn’t feel frightened out on the end of the enclosure. Instead, he seems to relish in all the attention he is receiving as the first bird seen when people walk upstairs. His new nickname is “Fancy Feet” due to his quick, excited hopping he does as he shows off for a new audience.

The beak fencing has ended for the time being. Paco makes a good peacemaker in the middle, as he doesn’t engage in fighting with either of the others. Paz also seems to be a bit more peaceful now that she isn’t pounding the cage with Pepe constantly. 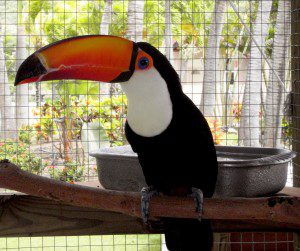 The only distress they exhibited with the move was at bedtime that first night. They all have their designated sleeping perches and when faced with nightfall, they all were quickly trying to get themselves comfortable and figure out where they wanted to sleep. They all ended up choosing the exact same sleeping perch as the cage’s previous resident and woke up looking refreshed as usual the next morning. For now, changing spaces seems to be a success and all is peaceful in Toucanland. 🙂