I have seen a lot of positive changes in the toucans since they first arrived at the end of June. They really seem to be settling in to their new home, less stressed and taking on each day with enthusiasm. They’re forming bonds with us, which I imagine is a welcome change for them, as they have never had a specifically designated caregiver for any extended period of time. 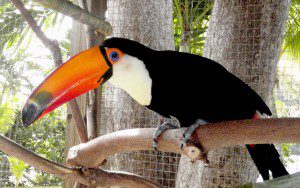 Pepe in particular has really made marked improvements in both his physical body and behavior. When we first adopted the birds, I had the most concerns for Pepe’s health. He is the smallest of the three, yet he eats the most. (We had them all tested for internal parasites and it came back all clear, so that was a relief.) I was also worried about Pepe’s face. He had a small irritation on his left cheek, beneath his eye. It was under the white feathers, so it looked like he had a bit of blush on. He would wet it and scratch it, but wouldn’t let us get close enough to really examine it. It was relatively minor-looking, so we decided to leave it be for the moment and see how it developed, rather than create undo stress in catching him to have a closer look too early on. But mainly overall, Pepe just seemed down. His eyes weren’t as big and bright as the other two, he was very skittish (I used to call him my “delicate little flower”), he was very clumsy, and he wasn’t very talkative, unlike the other two who purr away the moment you speak to them.

We quickly discovered that Pepe really LOVES toys. So much so that it breaks my heart to think he never really got any for pretty much his entire life at his past home, from what I understand. He’s much more captivated with toys than any food treat. He will play with any given trinket for much, much longer than Paco or Paz – his intense periods of focused energy are something I’m trying to emulate! In the beginning, Pepe was the least coordinated. He would fall off his perches whenever he got too excited or startled. He also had a difficult time coordinating the motion of holding anything with his feet. He would lower an object down from his mouth in an attempt to grasp it with his feet, raising a foot in the air, only to stomp his foot back down without making contact with his goal object. Now he manipulates toys with ease – hopping up and down between perches without dropping things and effortlessly holding manageable-sized items between his blue toes. 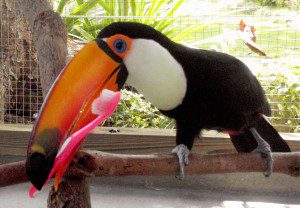 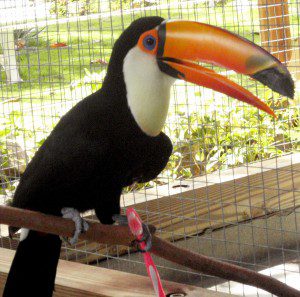 Pepe is also our top problem-solver. I believe it speaks volumes for their intelligence when you watch Pepe mentally encounter an obstacle and try to work towards a solution. For example, when Pepe gets a toy that is too hard for him to rip apart, he will bring it over to his water pan and dip it in, splashing it around in an attempt to soften it up. While this certainly doesn’t work for many items, he has definitely found success in this method with cardboard paper rolls! Also, if an object is too large to be held with their feet, the only option the toucans have is to carry the item around in their beaks as they hop around (the whole no-arms, no-hands predicament). Paco and Paz will generally tire of this after a bit and drop the item on the ground, moving on to the next area of interest. Pepe, on the other hand, will play with a toy for hours. It’s amazing to leave him with something as simple as a sock and come back an hour later to find him still bouncing around with it! He has figured out the key to taking breaks from his toys without having to lose them to the ground – he stores them in his food bowls, enjoys a time-out to drink & preen, then picks it back up again for more play. I may be biased, but I think this is quite resourceful of him. 🙂 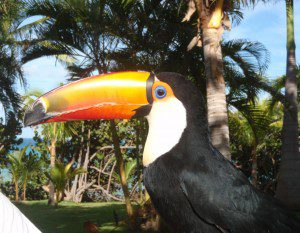 Pepe in the garden

Today, Pepe seems healthier and happier than ever. His eyes are very alert and bright; his face has healed and his plumage  is richly colored and fluffy. He hops around with ease and has really warmed to our presence – always rushing over to greet us the moment we enter his house. My former “delicate little flower” now hovers above me while I clean his cage each morning, wanting attention and treats, rather than staying fearfully away from the hose. He gets incredibly excited for new toys, always curious and ready to play, purring away when he gets something he’s intrigued by. I think for Pepe, the remedy to all of his troubles was mostly just a good diet (never underestimate the power of blueberries!) and a place he can feel secure and stimulated. I am overjoyed at Pepe’s turnaround and look forward to the good times we have ahead with my darling little Pep.

3 thoughts on “Pepe: Coming Into His Own”